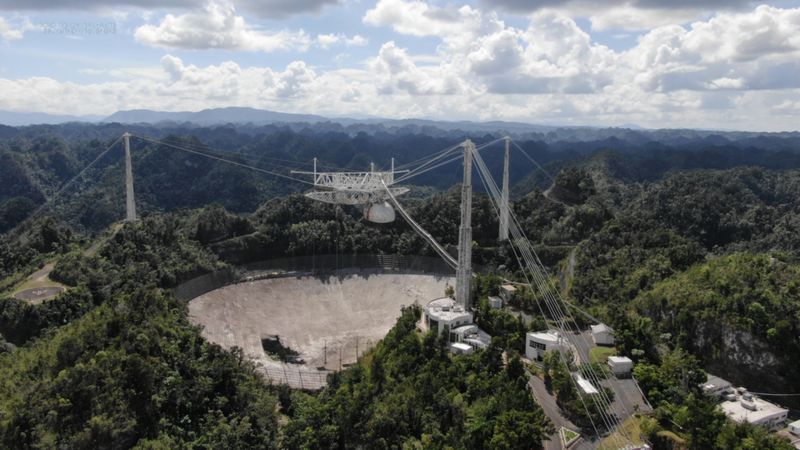 A huge radio telescope in Puerto Rico has collapsed after decades of astronomical discoveries.
The US National Science Foundation (NSF) said the telescope’s 900-ton instrument platform fell onto a reflector dish some 450ft (137m) below.

It came just weeks after officials announced that the telescope would be dismantled amid safety fears, following damage to its support system.
The Arecibo Observatory telescope was one of the largest in the world.
It was a key scientific resource for radio astronomers for 57 years, and was also made famous as the backdrop for a scene in the James Bond film GoldenEye and other Hollywood movies.
The NSF said there had been no reports of injuries following the collapse.
What happened to the telescope?
The NSF said the telescope collapsed at about 07:55 local time (11:55 GMT) on Tuesday, “resulting in damage to the dish and surrounding facilities”.
The telescope consisted of a 1,000ft-wide radio dish with an instrument platform hanging 450ft above. The platform was suspended by cables connected to three towers.
The NSF said an investigation into the platform’s fall was ongoing.
“Initial findings indicate that the top section of all three of the… telescope’s support towers broke off. As the 900-ton instrument platform fell, the telescope’s support cables also dropped,” it said in a statement.
“Preliminary assessments indicate the observatory’s learning centre sustained significant damage from falling cables,” it added.
Two cables had broken since August, damaging the structure and forcing officials to close the observatory.
A review last month found that the telescope was at risk of catastrophic collapse and said the huge structure could not be repaired without posing a potentially deadly risk to construction workers.
Officials said the structure would be dismantled.
Following the announcement, three members of Congress, including Puerto Rico’s representative Jenniffer González, requested funds “to enable the NSF to continue exploring options to safely stabilise the structure”.
Jonathan Friedman, who worked for 26 years as a senior research associate at the observatory and still lives near it, told the Associated Press news agency of the moment the telescope collapsed on Tuesday.
“It sounded like a rumble. I knew exactly what it was,” he said. “I was screaming. Personally, I was out of control… I don’t have words to express it. It’s a very deep, terrible feeling.”
The NSF said it was “saddened” by the collapse and would be “looking for ways to assist the scientific community and maintain our strong relationship with the people of Puerto Rico”.
“Top priorities are maintaining safety at the site, conducting a complete damage assessment as quickly as possible, and taking action to contain and mitigate any environmental damage caused by the structure or its materials.
“While the telescope was a key part of the facility, the observatory has other scientific and educational infrastructure that NSF will work with stakeholders to bring back online,” the agency said.
What is the history of the telescope?
By Paul Rincon, Science editor, BBC News website
The telescope was built in the early 1960s, with the intention of studying the ionised upper part of Earth’s atmosphere, the ionosphere. But it was soon being used as an all-purpose radio observatory.
Radio astronomy is a field within the larger discipline that observes objects in the Universe by studying them at radio frequencies. A number of cosmic phenomena such as pulsars – magnetised, rotating stars – show emission at radio wavelengths.
The observatory provided the first solid evidence for a type of object known as a neutron star. It was also used to identify the first example of a binary pulsar (two magnetised neutron stars orbiting around a common centre of mass), which earned its discoverers the Nobel Prize in Physics.
The telescope helped to make the first definitive detection of exoplanets, planetary bodies orbiting other stars, in 1992.
It has also been used to listen for signals from intelligent life elsewhere in the cosmos and to track near-Earth asteroids.
Over the years, the main dish appeared as a location in movies, including GoldenEye, Pierce Brosnan’s first outing as James Bond in 1995, and the 1997 science fiction drama Contact, starring Jodie Foster and Matthew McConaughey. – BBC News