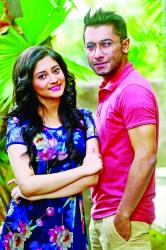 Entertainment Desk
For the first time in their acting career, promising young artistes Taskeen Rahman and Puja Cherry Roy have paired up for a film. The duo will appear in the film titled ‘Shaan’ under the direction of by M Rahim.
Stepping into the film industry with big hits, the artiste duo has also another thing common between them. During the shooting of their new film, they discovered they share the same birthday, which is August 20. However, Taskeen and Puja celebrated their birthday together in their own style.
The second phase of the shooting of ‘Shaan’ is scheduled to begin in November. Regarding their first collaboration, Taskeen said, “I came to Bangladesh from Australia with the sole intention to work in some wonderful films. From my very first film, the positive responses I have received so far were beyond my expectation, and it motivated me more to work in finest projects. I am really pleased with my current position. This is my first time working with Puja. She is a dedicated person who acts stunningly. We have amazing chemistry in our work.”
“The person whom everyone witnessed on the screen in his first film, Taskeen Rahman is actually completely different than that. He is a good-hearted person. Without a doubt, he is a talented actor. I was very pleased to know we share the same birthday”, said Puja on her part.On the other hand, Taskeen will soon leave for London to discuss his new film, the actor informed.