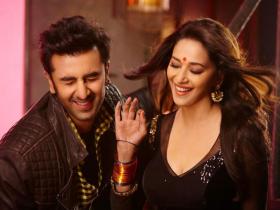 Bollywood star Ranbir Kapoor has confessed that his heart beats for dancing sensation Madhuri Dixit, with whom he did a special song for his upcoming film Yeh Jaawani Hain Deewani.

The 30-year-old actor, who is often linked with his co-stars, said he considers the actresses in his films as his ‘friends’.

“They (my co-stars) are my friends. I work with them in films and perhaps thats the reason why people keep talking about us. My heart only beats for one woman and her name is Madhuri Dixit. Through this film, my childhood dream of dancing with her is fulfilled. I feel very lucky to work with her,” he said during the promotion of the film here.

Ranbir shared the screen space with Madhuri for an item song Ghagra in the film, which will hit theatres on May 31. The actor also revealed that he was the one who suggested director Ayan Mukherjee to add a kissing scene at the end of the number.

“I do not know if I would get such a chance in life again or not. The kissing scene took four retakes and must say that I have not done these retakes intentionally,” he added.

Referring to Madhuri as his ‘Dream girl’, he continued, “When she comes on the screen, light spreads in all the directions.”

Ranbir, who got maximum fame for portraying a deaf and mute boy in Barfi, said he would not like to play a similar character like the one he played in Anurag Basu’s film. “I want to play new characters now. My wish is to work in action, thriller-suspense and period films,” he said.

Asked if he would like to reprise any of the character played by his father Rishi Kapoor in his films, Ranbir said, “I am a big fan of my father becuase he is a fine actor. But I don’t feel repeating any of his characters. I would not be able to do justice to them.”