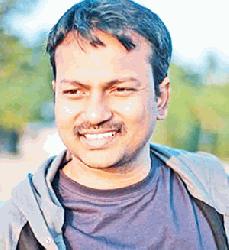 The song ‘Bhuler Gaan’, is voiced by famedsinger Rehan Rasul in Gondi– a film by Fakhrul Arefin Khan. The song is written and composed by renowned music personality Akash Chakraborty. Deep-Loy, a rising music director from West Bengal, is directing the music of the film ‘Gondi’. ‘Gondi’ is Fakhrul Arefin Khan’ssecond film– who is best known for making ‘Bhuban Majhi’.Rehan Rasul made his singing debut in the film titled ‘Gondi’.
The editing work of the film ‘Gondi’ is almost over. The editing work of the film ‘Gondi’ is near to an end. Meanwhile, all the film actors have finished their dubbing. The story of the romantic-comedy film ‘Gondi’ will proceed with the story of one man and one woman aged 55 and 65 years. The film shows how a friendship between a man and a woman went through in their retirement age, how the family and the people around them take up the issue, will come up in the movie. The prime two characters of the film are Feluda Sabyasachi Chakraborty from West Bengal and Subarna Mustafa from Bangladesh.
Other casts of the film are Subhasish Bhowmick, Majnun Mizan, Aparna Ghosh, Aman Reza, Payal Mukherjee from West Bengal and many others. The scene was shot in several places in Dhaka, Cox’s Bazar and London. Rupankar Bagchiand Debojyoti Mishra, the renowned artists of Kolkata, have already sung in Gondi.