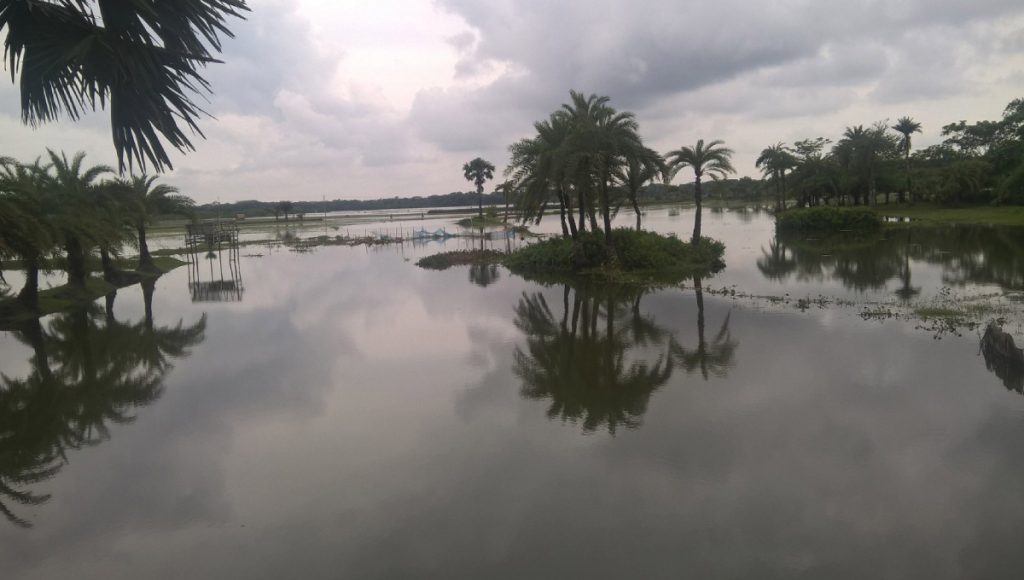 Satkhira, June 21 (UNB) – Farmers in Sadar uapzila of the district had harvested paddy from wetlands in a festive mood even last year, but this year they are struggling to remove saline water from their paddy fields, let alone harvesting crops.

A fear has gripped the farmers of 37 villages as shrimp farm owners filled nine waterbodies in the upazila with saline water in a planned way and this is set to take its toll on Aman cultivation this season.

Local farmers alleged that a section of influential people allowed saline water to pour into the waterbodies through opening the Amodkhali sluicegate in the Betna River aiming to farm shrimp in Buramara, Palichand, Dhepur Beel, Chelar Beel, Jordiar Beel, Khoriler Beel and other adjoining waterbodies.

During a visit to the area, the UNB correspondent found farmers worried due to stagnant saline water in the waterbodies as it cannot be drained out for lack of any drainage system.

Local farmers alleged that the Moricchap River has turned into a canal while the Betna River started dying, making the draining out the saline water from the waterbodies difficult.

According to the farmers, they will not be able to cultivate Aman this year if the saline water remains stagnant in the waterbodies.

Contacted, Fingri UP chairman Shamsur Rahman said, “I allowed saline water to pour into the waterbodies for creating artificial tide in the river and facilitating shrimp farming.”

The saline water will go away when there will be heavy rains in the area as the monsoon has set in, the chairman said.

Asked about permission from the Water Development Board in this regard, Shamsur could not say anything.

He said the farmers should have informed him when they saw the shrimp farm owners opening the sluicegate.

“Thousands of farmers can’t suffer for money making by a handful of shrimp farmers. Action will be taken against those responsible for it,” he said.