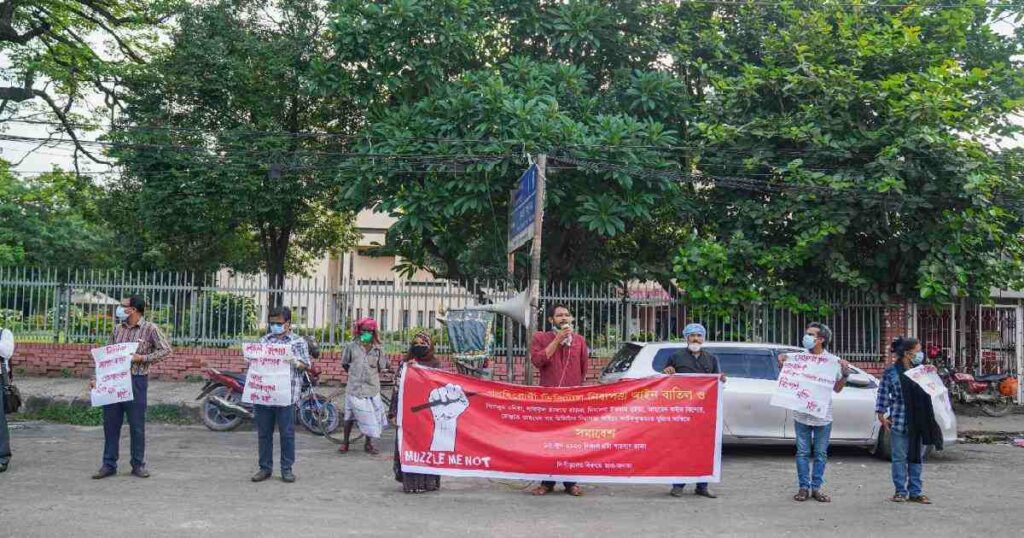 A group of protesters demonstrated at Shahbagh area of the capital on Monday seeking cancellation of Digital Security Act after a teacher of Begum Rokeya University in Rangpur was arrested for an allegedly ‘derogatory’ Facebook post.

Police arrested Sirajum Munira, a lecturer of Bangla Department of the University for ‘derogatory’ Facebook post on ex- health minister and Awami League leader Mohammed Nasim, who passed away on Saturday.

Amid concerns from different quarters, the ‘Digital Security Bill, 2018′ was passed in Parliament on September 19, 2018, to deal with cybercrimes, including hurting the religious sentiment, negative propaganda against the Liberation War and Bangabandhu, and illegal activities in e-transactions and spreading defamatory data.

President Abdul Hamid assented to the much-talked-about Digital Security Bill making it a law on October 8.

Transparency International Bangladesh (TIB) Executive Director Dr Iftekharuzzaman demanding its amendment said “The act will jeopardise not only the free expression of opinions but also practice of basic human rights of both the media people and mass people. Investigative journalism will also be hampered due to the law.”
UNB photojournalist took photos of the demonstration demanding the cancellation of Digital Security Act at Shahbagh on Monday.UNB