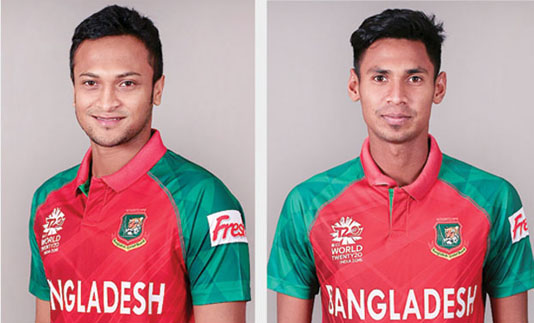 Shakib and Mustafizur however went straight to the Hotel for a mandatory 14-day quarantine as per the directive of the health department. While Mustafizur checked in Hotel Sonargaon with his wife for quarantine, Shakib chose to stay quarantine in Four Points by Sheraton in Gulshan,

“They have come here through a chartered flight and their respective franchisees made the arrangements,” BCB logistic official Wasim Khan told the media.

“The BCB monitored the whole matter. The players will stay quarantined for 14 days in Hotel Sonargaon.”

Shakib was the part of Kolkata Knight Riders while Mustafizur played for Rajasthan Royals in the IPL, which was postponed indefinitely due to the upsurge of Covid-19 cases in strict bio-bubble of the tournament. In fact the whole India was badly affected by the deadly second wave of the pandemic.

The Bangladesh government has recently issued a directive to stay mandatory a 14-day quarantine for the people coming for South Africa and India. In the past though the quarantine issue was relaxed in case of the national players and support staff, the health department this time remained strict on the issue, considering the ongoing second wave of pandemic, which was deadlier than the first wave.

Bangladesh had temporarily closed the border with India due to the vehement surge of Covid-19 cases in the neighbouring country and also the flights with India remained suspended.

However the quarantine period of Shakib and Mustafizur will end on May 20, which means they will be available for the national team from the first ODI against Sri Lanka, which is set to be held on May 23.

Sri Lanka will arrive in Bangladesh on May 16 and will stay in quarantine for three days before starting their training from May 19. They will also play a practice game at BKSP on May 21. The three ODIs, which are the part of ICC ODI Super League, are slated for May 23, 25 and 28. All of the matches are day-night and will be held at the Sher-e-Bangla National Cricket Stadium.

Sri Lanka is the second team to visit Bangladesh during the pandemic period. BCB earlier successfully hosted the West Indies in January-February.BSS