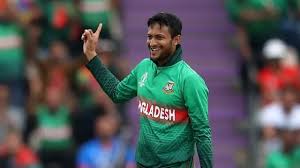 DHAKA —Bangladesh ace all-rounder Shakib Al Hasan is set to return to the country from USA tomorrow through a Qatar Airways flight, a Bangladesh Cricket Board (BCB) official said.

He will be accompanied by his mother Shirin Reza.

The premier all-rounder of the world returned to the country on November 8 to take part in the Bangabandhu T20 Cup after the ICC ban was lifted on October 29. Towards the end of the tournament, when he found out about his father-in-law’s illness, he boarded a flight on the morning of December 15.

However, after getting on the plane, Shakib got the news of his father-in-law’s death. 17 days later, with the upcoming West Indies series in mind, this ace all-rounder is returning to the country.

Shakib Al Hasan’s mother Shirin Reza went to the USA to see her beloved granddaughter after the birth of Irum Hasan, the second daughter of the Shakib-Shishir couple in April last year.

He said, “Shakib will arrive in Dhaka tomorrow at 10 am with his mother on Qatar Airlines.”

The Bangladesh team is scheduled to start training camp on January 10. The West Indies team will also due in Bangladesh on that day.BSS