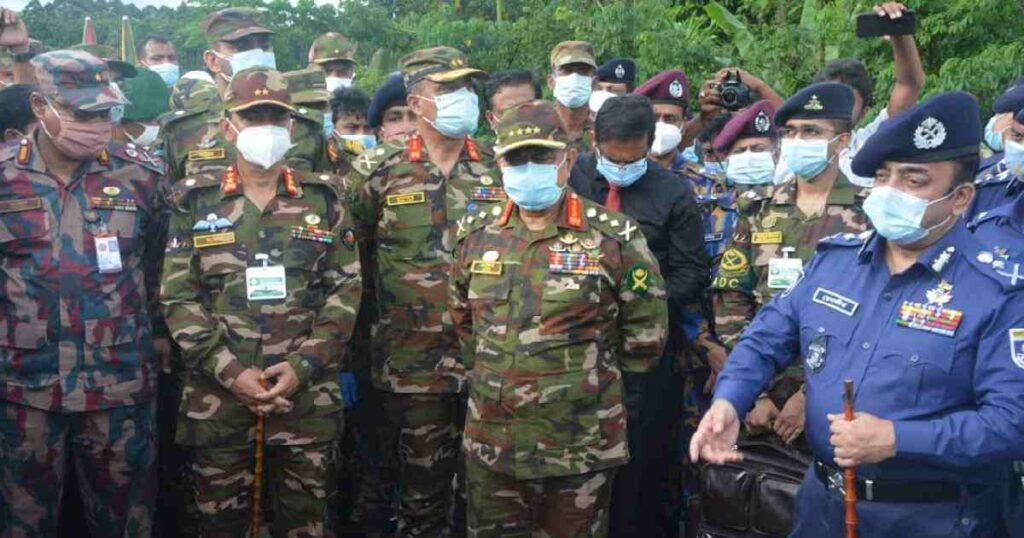 Cox’s Bazar, Aug 05 – The chiefs of Bangladesh Army and Bangladesh Police on Wednesday affirmed that the death of Major (retired) Sinha Md Rashed will have no effect on the two forces. Bangladesh Army chief General Aziz Ahmed and Inspector General of Police (IGP) Dr Benazir Ahmed came up with the assurance at a joint press briefing in the beach town around 2 pm.
Addressing the briefing, General Aziz Ahmed said, “A probe body is looking into the incident. All the people named by the body will be put on trial…. no one of them will be spared.”
The Army chief said, “The Army and the Police forces have trust on the probe body. The responsibility for the incident lies with individuals and not with any organization. The army wants to see Sinha’s death as an isolated incident.”
IGP Benazir said there will be no (adverse) effect (in the relationship) between the two forces because of what happened in Teknaf.
“The joint probe body formed as per the direction of the Prime Minister will investigate the incident in an influence-free environment. Legal action will be taken based on its report,” the police chief added.
Dr Benazir also warned that those who are delivering provocative speeches and trying to gain benefit exploiting the situation will never be successful.
He urged all to refrain from delivering provocative speeches for the sake of the country.
The IGP urged the local journalists to cooperate with the local administration by providing information about drug smuggling.
Major (retd) Sinha Md Rashed was killed in police firing at Baharchhara police check-post on Friday night.
Two people were arrested and two cases filed in this regard, said Superintendent of Police ABM Masud Hossain on Saturday.
In further development, the authorities on Sunday suspended 21 police officers, including the in-charge of Baharchhara police outpost. – UNB