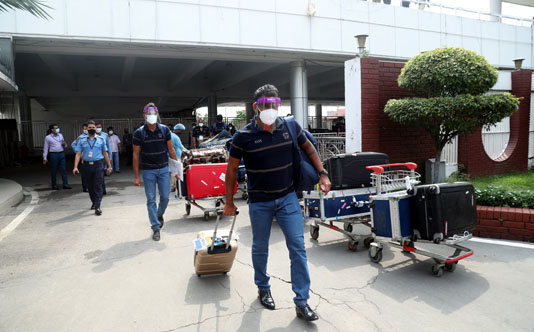 DHAKA—The Sri Lanka cricket team, led by Kusal Perera arrived in Dhaka on Sunday to play a three-match ODI series against Bangladesh, which is the part of ICC ODI Super League.

The points of the ODI Super League are important to make a direct entry to the 2023 Men’s World Cup in India. The Lankan team reached here by special flight of Sri Lankan Airlines at around 8 AM.

They however went straight to the Pan Pacific Songargaon hotel, where they will stay quarantine for three days, as per the rules set by the Bangladesh government, said chief physician of Bangladesh Cricket Board (BCB) Dr. Debashis Chowdhury.

He said in those three days, they will undergo Covid-19 test twice before they start practice on May 19.

“They came here with corona negative certificate from Sri Lanka but the visitors will go through a series of corona test as per the rules of our government,” Dr. Chowdhury said here today.

“Both Bangladesh and Sri Lanka team will play an inter-squad warm-up game at BKSP on May 20 and 21. Then both of the team will undergo a Covid-19 test on May 22 after which they will play the first ODI on May 23. The Sri Lanka will have two tests during quarantine period .They will have last test before leaving Bangladesh.”

The Bangladesh players however will undergo a Covid-19 test on May 17 after the Eid holiday. Subject to the negative in Covid-19 test, they can join practice session again.

The three ODIs are slated for May 23, 25 and 28. All of the matches are day-night and will be held at the Sher-e-Bangla National Cricket Stadium.

The Sri Lanka is the second team to visit in Bangladesh during the pandemic period. BCB earlier successfully hosted West Indies in January-February.

Bangladesh however earned 30 points after beating West Indies by 3-0 in three-match ODI series but lost to New Zealand in away series by same margin. Sri Lanka on the other hand lost the three-match series to West Indies in away by 3-0.

“We have to play fearless cricket. Can’t be playing to protect your place in the side. When you do that you don’t give 100 percent. What I am telling the team is to give your best and that will work in crunch situations,” Sri Lanka’s Kusal Janith Perera told local media after he was appointed captain for the tour.

Sri Lanka on Wednesday sacked one-day captain Dimuth Karunaratne, who led from the front to win the two-match Test series by 1-0 at home recently, and dropped him and a host of other big names from the squad heading for Bangladesh. Two other former skippers — Angelo Mathews and Dinesh Chandimal — were also dropped along with Suranga Lakmal and Nuwan Pradeep. Kusal Perera has been named as the new captain, with Kusal Mendis as his deputy.BSS