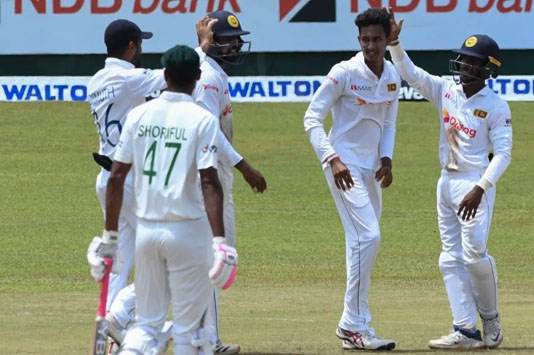 DHAKA- Bangladesh conceded the two-match series by 1-0 after a humiliating 209-run defeat at the hands of Sri Lanka in the second and final Test at Pallekele International Cricket Stadium in Kandy on Monday.

The first Test at the same stadium ended in a draw, the only consolation for the Tigers, who now lost 92 matches out of 123 they played since their elevation to the elite level of cricket in 2000. Of the 92 defeats, 43 came by innings and they won just 14 matches, while the rest of the 17 matches were drawn.

Bangladesh in fact could have lost this match by innings margin had Sri Lanka enforced follow-on after taking a 243 runs in the first innings.

The visitors in fact was bowled out for 227 runs in their second innings, tasting a big defeat in a pitch where though there was considerable amount of turn and bounce, this was by no means a rage turner. But their mindless batting dug their own graveyards.

Sri Lanka left arm-spinner Praveen Jayawickrama was the wrecker-in-chief, claiming 11 wickets on debut. His bowling figure was the best by a debutant Sri Lankan bowler and he became only 16 bowlers to take more than 10 wickets on debut.

Following his 6-92 in the first innings, Jayawickrama ended with 5-86 in the second innings as Bangladesh was wrapped up for 227 after over an hour, resuming the fifth day on 177-5.

Liton Das and Mehidy Hasan Miraz were in the crease with Bangladesh needing 260 runs still for an improbable victory as they were chasing 437-run target. The highest successful chase in Test cricket history is 418, achieved by West Indies against Australia.

Jayawickrama broke through immediately, claiming the wickets of Liton after he added just 3 to his overnight 14. Jayawickrama completed his 10-for by getting the better of Miraz, who dared to play a lap-sweep. He made 39 off 86, hitting four boundaries.

Off-spinner Ramesh Mendis, who played a perfect foil to Jayawickrama had figures of 4-103 while the rest of the wicket went to Dhananjaya de Silva who dismissed Taijul Islam for 2.

Bangladesh then was bundled out for 251, as Jayawickrama dismantled them with 6-92, the best figure by a Lankan bowler in an innings on debut. The visitors were still short of 43 runs to avoid the follow-on but Sri Lanka chose to bat again.

This time again Karunaratne led the way with 66 runs as the hosts declared the second innings on 194-9, setting an imposing 437-run target for Bangladesh to win the game. Bangladesh however came up with dismal batting show with most of the batsmen playing dubious shot after getting set to sink the team.