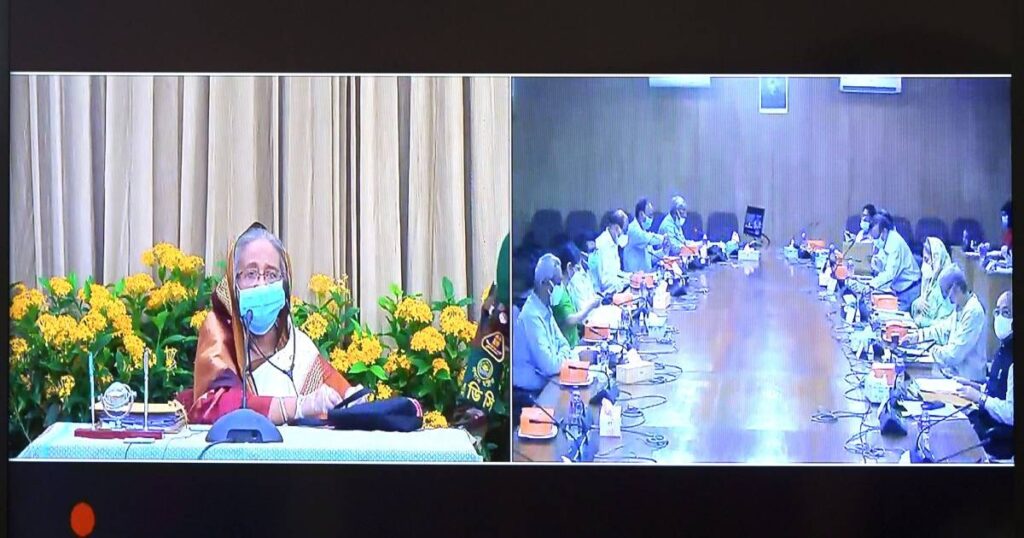 Dhaka, July 27 – Prime Minister Sheikh Hasina on Monday directed the administration to stay ready to extend all sorts of assistance to the flood-affected people as the flood may prolong this time.
“There’s an apprehension that the flood may prolong this time…the PM has given a clear instruction to the administration that it’ll have to provide people with whatever assistance they need,” said Cabinet Secretary Khandker Anwarul Islam at a press briefing after the Cabinet meeting.
The Cabinet meeting was held virtually with Prime Minister Sheikh Hasina in the chair.
Sheikh Hasina joined the meeting from her official residence Ganobhaban through a videoconference, while other cabinet members were connected from the Bangladesh Secretariat.
“It (admin) will have to be careful about such flood at this time of Covid period,” the Prime Minister was quoted as saying.
Hasina directed the field-level administrations to provide all sorts of relief materials and take measures so that the flood victims can take shelter in schools, colleges and madrassahs where there is a lack of shelter centres, said the Cabinet Secretary.
All the field-level government employees, working up to union level under the ministries or divisions concerned, particularly education, health, madrassah education, family welfare and agriculture, must be there in their work stations during the flood, he said.
During the long unscheduled discussion at the meeting, the State Minister for Disaster Management and Relief elaborately explained the preparations taken to tackle the possible prolonged flood, said the Cabinet Secretary replying to a question at the briefing.
Though there is an in-built mechanism at the field-level administration to face flood, this time extra efforts are being made as there is a fear that this flood may last long, he said.
Referring to a Canadian university forecast, he said the floodwater may get stuck up for a longer time from the beginning of the Bengali month of Bhadra as the world climate scenario shows that the water level is now on the rise in different seas, including the Bay of Bengal.
The Prime Minister asked the authorities concerned to personally make sure the rehabilitation programmes taken for the flood victims are implemented effectively and timely, said Khandker Anwarul Islam.
If the flood prolongs, it will help enhance the productivity of T Aman (Ropa Aman) due to siltation to be caused by the flooding, he said adding that the bumper production of crops was also seen after the floods in 1988 and 1998.
Even amid the flood, there is a potential to have good production of Aman in highlands of the country’s northern region due to enough rain and water though flood damages the crops in low-lying lands, he said.
The Agriculture Minister explained in details the production of crops (Aman and T Aman) during the flood and post-flood periods, he said.
“So, the Prime Minister instructed all to remain very attentive to production of T Aman crops so that we can utilise the full potential of the siltation (post-flood period) and can yield good production as we’ve excess crop output during the recent Boro season,” he added.
“The Prime Minister supervises it (the flood situation and relief activities) on her own,” said the Cabinet Secretary. – UNB