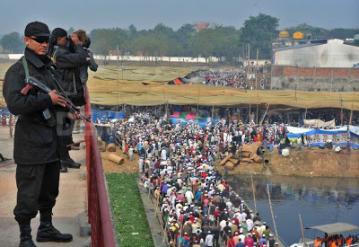 Dhaka, Jan 17 – The second phase of the 55th Biswa Ijtema, the second-largest annual congregation of the Muslims, began yesterday morning on the bank of Turag River at Tongi, on the outskirts of the Dhaka city, amid tigh

t security.
The proceedings began after the Fazr prayers with an ‘Aam Bayan’ (general sermons) by Indian scholar Mawlana Cherag Ali after Fajr prayers. It will wrap up with an ‘Akheri Munajat’ (final prayer) on Jan 19.
The followers of Maulana Saad Kandalvi, a Delhi-based member of the Tabligh Jamaat Supreme Council, are taking part in the event. Earlier, followers of Maulana Zubair Ahmed, the imam of Dhaka’s Kakrail Mosque, the headquarters of Tabligh Jamaat’s Bangladesh chapter, attended the first phase of the congregation from Jan 10 to 12.
One devotee died due to old age complication at the Biswa Ijtema venue on Thursday night before the Ijtema begins. The deceased was identified as Kazi Alauddin, 66, of Laxmipur Chandpur area of Sunamganj. With him, three devotees died in this phase of Biswa Ijtema.
Deputy Commissioner of Gazipur Metropolitan Police, also in charge of the police control room of the Biswa Ijtema, Monjur Rahman said that Alauddin falls ill at his khita around 12pm on Thursday. Later, he was taken to local Shaheed Ahsan Ullah Master General Hospital in where the doctor declared him dead.
Earlier, 11 devotees have so far died due to cold and old age complications at the first phase of Biswa Ijtema.
Several thousand of devotees from Saudi Arabia, Pakistan, India, Iraq, Turkey, and foreigner believers from Africa and America gathered at the banks of the Turag River in order to take part in the religious event to seek divine blessings of the Almighty Allah, said Waseful Islam, the coordinator of Ijtema’s second phase.
Besides, Additional police have been deployed in and around the Ijtema venue to ensure the security of the devotees of home and abroad. The venue has also been brought under CCTV surveillance, said Waseful.
Healthcare centres have been set up at different parts of the venue along with first aid and other treatment facilities to provide health care services to the devotees, he said.
More than two lakhs Muslims attended Jumu’ah, also known as Friday Prayer. Maulana Mosharraf Hossein led the prayer, he added.
Tablig Jamaat has been organizing the Ijtema at this venue since 1967. However, the Ijtema is held in two phases since 2011 to ease the accommodation problem. In this year, the second phase of the congregation is led by the followers of Maulana Saad Kandhalavi. – Staff Reporter