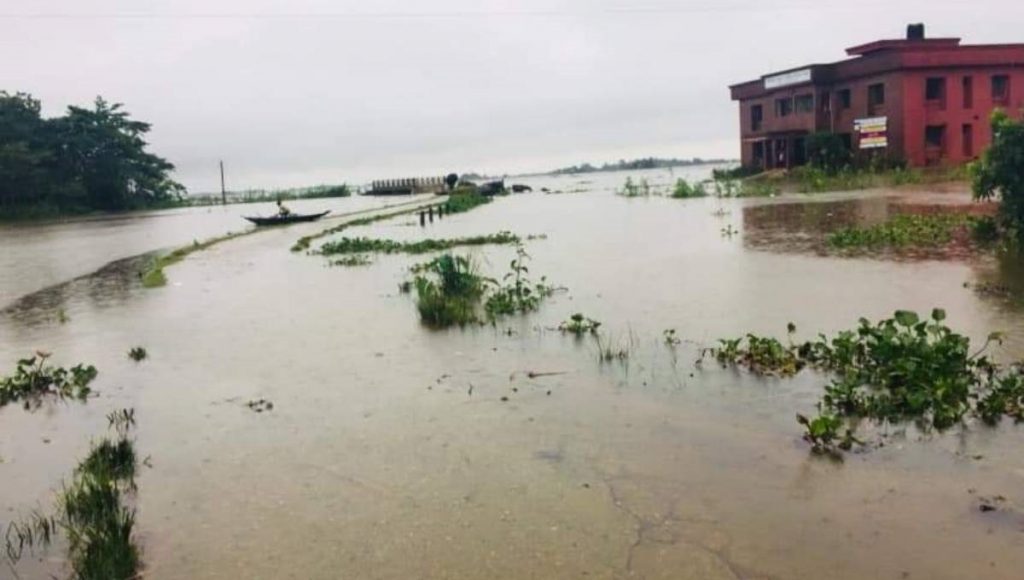 Dhaka, July 12 (UNB)- The Teesta and Dharla rivers are flowing above the danger level, marooning over 12,000 families in Lalmonirhat, while hundreds of establishments face the risk of being swallowed by the Meghna.

Rabiul Islam, Executive Engineer of Dalia point of the barrage, said all sluice gates have been opened. Excessive flow of water has led to the inundation of low land and char areas in Lalmonirhat, he said.

District Relief and Rehabilitation Officer Ali Hayder said at least 950 packets of dry food, 150 metric tonnes of rice and Tk2.5 lakh will be distributed among the affected people after getting a list from the upazilas.

Locals said heavy rain in the last five days disconnected the area from the district town. The Children, elderly and handicap people have been facing crisis mostly due to unavailability of drinking water.

Manik Mia of Mohishkhocha union under Aditmari upazila said they did not receive any relief yet from anyone.

To add to the woes, the flood control dam at Talebmore area at Hatibandha upazila may collapse anytime.

Our Chandpur correspondent reports that residents of Amtoli area in Haimchar upazila are passing days amid worries due to the intensified Meghna River erosion.

Ahmed Ali Master, chairman of Charbhairabo Union Parishad, said the erosion by Meghna took a serious turn during the last couple of days following the rise in water level.

Haimchar River Protection Dam, many business establishments and a local mosque may go into the river anytime, he said.

Raihan said GO bags will be dumped on the riverbanks and a proposal will be sent to the higher authorities to build a permanent dam.

UNB’s Sherpur correspondent reportsthatconstant rain and heavy flow of water from the upstream have worsened the flood situation.

The situation will improve when the rain stops, he added.

Our Sylhet correspondent reportsthatparts of Goainghat upazila have gone under water during incessant rain over the last couple of days.

Communication with upazila sadar and low-lying areas were cut due to flooding.

On the other hand, erosion put several dams in the area at the risk of collapse.

They have already started to send relief goods to every union of the upazila, he added.