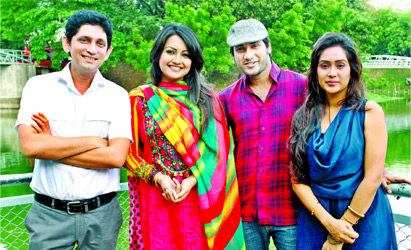 For the first time Sajal, Momo, Nawsheen and popular singer Shahid have performed together in a TV play. They have worked together in Ziauddin Alam directed faction play “Shudhu Ek Minute.” Shooting of this play started on Wednesday in different locations in the city.Jakia Bari Momo has performed in role of a radio jockey (RJ). Shahid has also performed in same role. Shahid has performed in his own character.
While shearing his feelings to perform in this play Shahid told, “I have agreed to act in this play only for passion. Therefore, I have performed in my own role. Shooting was held at studio of Dhaka FM. I have enjoyed to perform in it. I hope viewers will also enjoy the play.”
While talking about her performance Momo said, “I have performed in role of a RJ. I always think about how a RJ can speak continuously? I have tried my level best to express my role. Therefore, story of the play is nice. I believe that viewers will enjoy it.”
“Earlier I had worked with Zia bhai’s direction. But its story is really exceptional. Nawsheen is my co-artiste in the play. Overall it is a good play, I think so,” said Sajal while shearing his feelings.
On the other hand, director of the play Ziauddin Alam said, “Story of the play is nice. A song has been used in the play which will pay the attention of the viewers.”
Script of the play was written by Rumman Rashid Khan. This play has been made on the occasion of upcoming Eid festival. Dhaka FM is radio partner of the play.
Tanvir Masud, Tisha Hossain, Saimon Tariq and Kazi Uzzal have also performed in other roles besides Sajal, Momo, Nawsheen and Shahid in the play, according to director Ziauddin Alam.
(Agency)