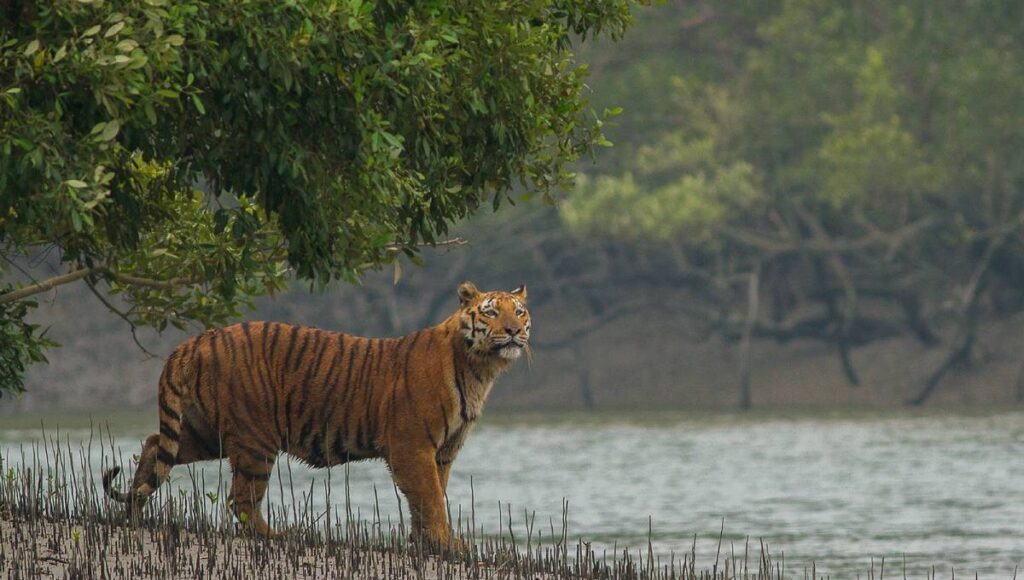 Dhaka, July 14 – A total of 38 tigers died in the last 20 years in Bangladesh part of the Sundarbans.
Within a gap of five months, the Forest Department found two dead tigers one in the Sundarbans West Andharmanki Forest Camp area and the other in Sundarban West Division area. The Forest Department sources said both the Royal Bengal Tigers died of old age reasons.
However, earlier in May last year, the Environment, Forest and Climate Change Minister Md Shahab Uddin said the number of Royal Bengal Tiger in Bangladesh part of the Sundarbans increased to 114 from 106.
He made the announcement while unveiling a report on ‘Second Phase Status of Tiger in Bangladesh Sundarbans 2018’.
According to the information from Forest Department in between 2001 and July 2020, altogether 38 tigers died, 22 in East Division and 16 in West Division of the Sundarbans.
Sources at the Forest Department said that some of the tigers died by poachers, some died in lynching, some passed away by storm and tidal surge while some died of old age.
According to the latest Tiger Survey that was conducted in 2018, there were 114 tigers in the Sundarbans.
However, the Forest Department could not ensure if the number remained the same or saw a decrease in 2020.
Earlier on May 14, last year, a study by scientists of Bangladesh and Australia, warned that the Sundarbans’ famed ‘Royal Bengal Tigers’ could be gone within 50 years, especially from the Bangladeshi part, because of a constant rise in sea levels and climate change.
The study was published in the journal Science of The Total Environment.

About the recovery of the dead tiger on Friday last, Bashirul Al Mamun, Divisional Forest Officer (DFO), West Sundarban, said the tiger was seen roaming around Andharmanik Forest Camp for the last few days.
Later on Friday noon, it was found dead a few yards from the Forest Camp. It was a seven-feet long and three feet high 14-year old tigress, he added.
DFO Bashirul Al Mamun, the tigress sustained injuries on her left leg and an autopsy was done by a veterinary doctor.
He also informed that the skin and teeth of the tigress were reserved while the sample from the tigress was sent to Dhaka Forest Office for the true reason of the death. “It’ll be clear after a forensic study.”
Earlier on February 3, this year, somebody parts of a tiger were recovered from Kaborkhali Canal in East Divisional Sundarbans, said DFO Muhammad Belayet Hossain adding that according to the forensic report, the tiger died of old age.
DFO Hossain also informed that the government has taken different steps to protect tigers in the Sundarban.
The sanctuary of the Sundarbans has been increased from 139,700 hectares to 317,900 hectares among the total of 601,700 hectares forest area, he informed.
He also informed that the expansion of sanctuary in the Sundarbans, was launched in 2017 and a patrol team has been conducting smart patrolling regularly to ensure tigers’ safety.
According to the Forest Department of Sundarbans East Division, 22 tigers died in between 2001 and February 3, 2020, in that part of the forest.
Among those, 10 were killed by miscreants, five were lynched, six died normally, and one tiger died during Cyclone Sidr in 2007.
Skins of 16 tigers could be recovered among those 22, the sources said.
Meanwhile, Sundarbans West Division sources said that between 2001 and 2020, 16 tigers died in this forest region.
Among those, nine were lynched, and seven died from sickness and old age complications, the sources said.
According to experts, each tiger occupies and identifies a total of 14 to 16 kilometres from its living station as its own territory but roams all over the forest.
According to a census, Bangladesh Forest Department jointly with Wildteam and the Smithsonian Conservation Institute, USA, found that the number of Royal Bengal Tiger in Bangladesh part of the Sundarbans has increased to 114 from 106.
The second phase census began on December 1, 2016, under the USAID (Bengal Tiger Conservation Activity (BAGH) project through camera trapping methods.
The survey was conducted till 24th April 2018 in 1656-sq km area of the Sundarbans in four phases.
The total area was divided into three blocks — Satkhira, Khulna and Sharankhola ranges.
The cameras captured a total of 2,466 images during the 249-day census.
The first-phase survey of the USAID BAGH project recorded 106 tigers in 2015. – UNB