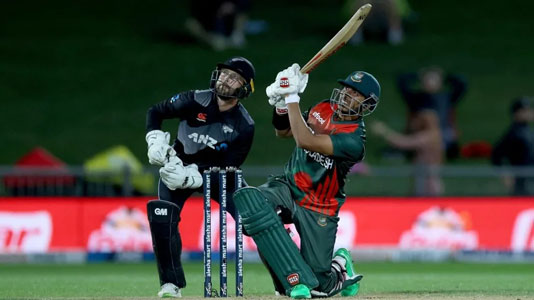 Dhaka, Apr 01:  While chasing a huge total of 141 runs in 10 overs in the third T20I against New Zealand, Bangladesh got all-out for 76 in 9.3 overs on Thursday at Auckland. This is the first time for Bangladesh to lose all 10 wickets in less than 10 overs in any format of international cricket. And with losing this game by 65 runs, Bangladesh losing streak against New Zealand in New Zealand reached 32 international games— the longest losing streak in International cricket against a team in their backyard.
Soumya Sarkar started well hitting two fours off the first three balls he faced but got out of the fourth delivery of the first over bowled by the New Zealand captain Tim Southee. Off the last ball of the first over, Liton Das, captain of Bangladesh in this game as the regular captain Mahmudullah Riyad was ruled out due to an injury, tried to scoop off the first ball but Southee shattered his stumps.
Bangladesh were never in a position in this game to offer some challenge to the hosts who won the T20I series 3-0. They had also won the sealed ODI series by the same margin.
Mohammad Naim smashed some watchful sixes and one four, but that was not enough to run for the win in the game which was reduced to 10-over a side due to rain before the match.
Naim was the highest runs getter in this game for the visitors with 19 off 13 balls with two sixes and one four while Mosaddek Hossain scored 13 and Soumya posted 10.
For the hosts, leg-spinner Todd Astle bagged four wickets conceding 13 runs in two overs while Tim Southee took three wickets giving only 15 runs away in three overs.
Earlier, Bangladesh won the toss and opted to bowl first under the overcast condition.
In the three-over powerplay, New Zealand smashed 43 for none. Nasum Ahmed started bowling conceding nine runs in the first over. In the second over, Taskin Ahmed conceded 14 runs, and Nasum came in the third over and gave away 23 runs with three fours and one six.
New Zealand continued to smash boundaries as Finn Allen completed his first T20I fifty off 18 balls with eight fours and two sixes.
Finn got dismissed by Taskin in the last over as the substitute fielder Mehdiy Hasan Miraz took a tough catch at the boundary in the third man area. Finn ended up on 71 off 29 balls with 10 fours and three sixes.
Bangladesh got the first wicket when Martin Guptil skied off Mahedi Hasan to the deep area and Afif Hossain took an easy catch. Guptil ended up on 44 off 19 balls with five sixes and one four.
Eventually, New Zealand ended up 141 for four with Finn hitting the highest score of 71.
For Bangladesh, Mahedi, Taskin and Shoriful bagged one wicket each while the other wicket fell prey to runout.
Before coming into the T20Is series, the Tigers have lost the three-match ODI series 3-0. Bangladesh played a total of 31 international matches in New Zealand but failed to come up victorious in any of them.
Bangladesh made three changes in this game as Najmul Hossain Shanto, Mosaddek Hossain and Rubel Hossain came in to replace Mahmudullah Riyad, Mohammad Mithun and Mohammad Saifuddin, reports UNB.