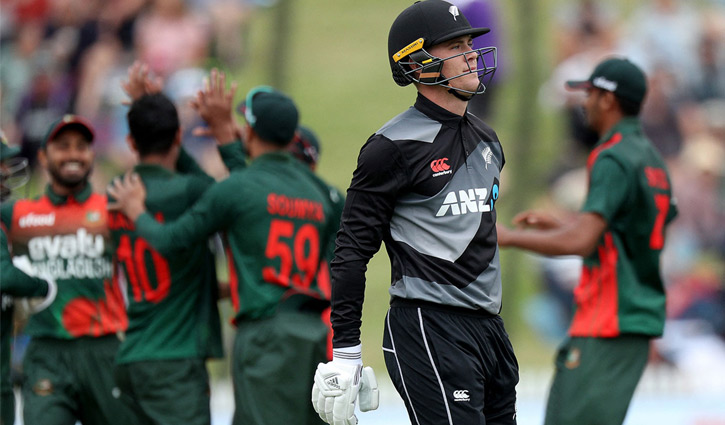 Dhaka, Mar 28: Bangladesh national cricket team continued on losing streak after losing the ODI series 3-0, they lost the three-match T20Is series opener against New Zealand on Sunday by 66 runs, reports UNB.
Devon Conway and Will Young took the game away from the Tigers hitting unbeaten 92 and 53 respectively. Riding on their batting efforts, New Zealand posted 210 for three at the Seddon Park, Hamilton.
In reply, Bangladesh tumbled for 144 for eight in 20 overs and lost the game by 66 runs. Afif Hossain, Mohammad Saifuddin and Mohammad Naim offered some resistance, but that wasn’t enough to avoid a big defeat.
Ltion Das failed once again to come up with an effective innings as he fell prey to Tim Southee, the New Zealand captain, for four. After Southee’s initial blow, hosts’ leg-spinner Ish Sodhi bagged four wickets conceding 28 runs in four overs. In the absence of Mushfiqur Rahim, the onus was on Soumya Sarkar, Mohammad Mithun and Mahmudullah Riyad to bat well, but they failed to do so.
Coming to bat at number six, Afif scored 33-ball 45 with five fours and one six while Saifuddin smashed an unbeaten 34 off 34 deliveries and Naim scored 27 off 18 balls with five fours.
For New Zealand, Sodhi bagged four wickets while Lockie Ferguson took two wickets.
Earlier, New Zealand lost their first wicket to the debutant Nasum Ahmed. In spite of this blow, they posted a big total riding on the second and third wicket stands.
In the second wicket stand, New Zealand added 57 runs with the help of Martin Guptill and Devon Conway, who is on good form for a while now.
Inside the powerplay, New Zealand lost only a wicket. But in the very next over, Mahedi Hasan removed Guptil for 35. In the third wicket stand, Conway and Martin Guptill added 105 runs off 60 balls. They were destructive against the Bangladeshi bowling attack.
Glenn Phillips hit 24 off 10 balls coming into the crease at number five. With his blazing batting display, New Zealand passed the 200-run mark.
For Bangladesh, Nasum bagged two wickets while Mahedi took one. Shoriful Islam, the other debutant of Bangladesh, had a bad day at the office as he conceded as many as 50 runs in his four overs.
The remaining matches of this series will take place on March 30 and April 1 at McLean Park, Napier and Eden Park, Auckland respectively.