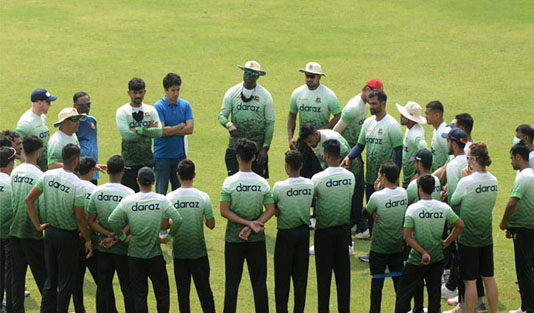 DHAKA—As part of their preparation for the forthcoming three-match ODI series against Sri Lanka, Bangladesh team will play an inter-squad practice game tomorrow (Thursday) at the BKSP ground.All of the members of the preliminary squad will split into two teams to play the game. After the match, the final squad for series will be announced, a BCB official said.

The Sri Lanka team will also play an inter-squad game on Friday to prepare them for the series.

The players and support staff of the two teams will go through a Covid-19 test ahead of the first ODI, scheduled for May 23. The rest of the two matches will be held on May 25 and 28 and all of the matches will be taken place at the Sher-e-Bangla National Cricket Stadium.

Bangladesh received a blow ahead of the series after fast bowlers Rubel Hossain and Hasan Mahmud were ruled out from the series due to their injury and hence they will be considered for the selection.BSS