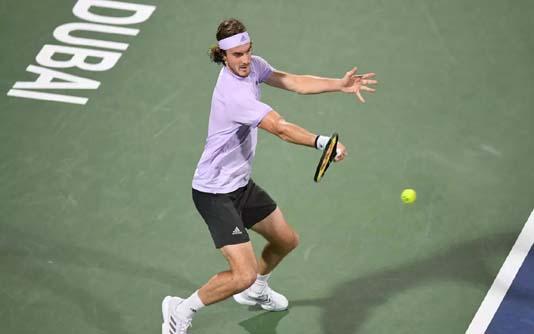 ATHENS  (BSS/AFP) – Greek tennis star Stefanos Tsitsipas said on Tuesday the coronavirus pandemic lockdown has given him a chance to brush up on his French.

The 21-year-old ranked sixth in the world has returned home with the global season on hold due to the COVID-19 outbreak.

“It’s an opportunity to stay a little longer with my family and do things I didn’t have time to do before,” he said during an online chat with Greek Prime Minister Kyriakos Mitsotakis.

“Specifically, right now on a daily basis I’m trying to learn a little bit of French, it’s something I’ve always wanted but I didn’t have time to deal with and it’s an opportunity now,” Tsitsipas said.

Mitsotakis had a teleconference with outstanding Greek athletes such as Tsitsipas to thank them for their contributions in encouraging people to exercise at home while observing the measures.

“We do have the opportunity to change habits and come out of this trial stronger. People will understand the importance of a healthy lifestyle and might even discover exercise again, even if at home, and even light jogging, things that are allowed under the circumstances,” Mitsotakis said.

The premier said if April goes smoothly with measures against the illness, the gradual return to normalcy may begin in May, “which will include an increase in sports activities.”

Greece’s world number 20 Maria Sakkari thanked and congratulated Mitsotakis and his government for the positive results in the fight against the virus.

“We all understand that it is not easy, it is something very difficult, we are all grateful. I think I am speaking on behalf of everyone, it is something admirable that you have achieved,” 24-year-old Sakkari said.

Olympic pole vault champion Katerina Stefanidi, 30, said things are very difficult and “the more we sit, the more it will take us to return to the normality of things for us.”

“We are in a difficult time from now on, but I think everyone is doing what they can at home, on the street, a little on the beach,” Stefanidi added.