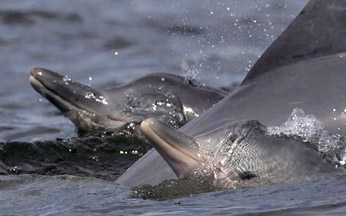 Pathukhali, May 11 – Two dolphins were found dead on Kuakata beach on Sunday and Monday. Local people said bodies of two dolphins length about 10 feet were found lying on the beach.
One dead dolphin was found near Lebur Ban on Sunday and another in Gangamoti sea beach on Monday morning.
On information, municipality officials and local Fisheries and Livestock officers rushed to the spot.
They also spotted injury marks on the bodies of the dolphins.
It is suspected that the dolphins died after being hit by fishing nets.
However, the actual cause of the death of the dolphins could not be known immediately.
Molla Emdadullah, Patuakhali District Fisheries Officer, said a team was sent to the spot and they are trying to conduct autopsy of the dolphins to know the actual reason for their death.
Wildlife Management and Nature Conservation Division officials said the dolphin is locally known as ‘Utom’ or ‘Susuk’ which is found in fresh water.
International Union for Conservation of Nature (IUDN) already marked it on the red list as it is a rare species which is on the verge of extinction.
In 2010, the government announced a sanctuary for fish in 40 km areas from Nazirhat to Kalurghat in Chattogram. – UNB