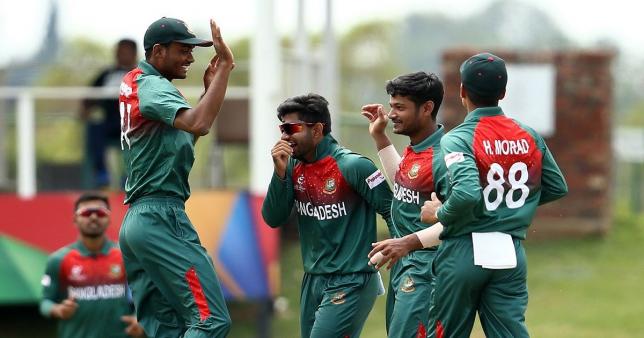 Dhaka — Junior Tigers made history beating the four-time champions India by three wickets in a dramatic final of the ICC Under-19 World Cup on Sunday at Potchefstroom, South Africa.

It was Bangladesh’s first-ever final in an ICC event (outside the World Cup qualifying ICC Trophy), and they didn’t miss the chance to create history, emerging as unbeaten champions.

To lift the World Cup trophy, Bangladesh needed to score 178 runs. They started well as the openers, Parvez Hossain Emon and Tanzid Hasan, scored 50 runs in the first wicket stand. Tanzid fell as the first wicket in the fifth ball of the ninth over of the innings. He was haunted by leg-spinner Ravi Bishnoi.

After losing the first wicket in 50 runs, Bangladesh lost three more wickets within next 15 runs. Mahmudul Hasan Joy, who hit a century in the semifinal against New Zealand, fell this time for eight only. After his dismissal, opener Parvez had to walk back to the dressing room with a leg injury. This situation has probably ruined Bangladesh’s focus as they lost three two more wickets within 15 runs.

Towhid Hridoy and Shahadat Hossain fell for a duck and one respectively. Bangladesh went down from 50 for none to 65 for four wickets. All of these wickets were taken by the mystery spinner Bishnoi.

The batting debacle in the middle-order made Bangladesh’s chance compressed. The onus was on Shamim Hossain and Avishek Das to stay calm and partner captain Akbar Ali, but both of them were poor in the middle. After losing six wickets in 102 runs, Parvez backed to the wicket to accompany captain Akbar Ali, who played a captain’s knock that saw his team through and won him the man of the match.

Meanwhile, Yashasvi Jaiswal of India has been adjudged play of the tournament for his brilliant performance in the tournament.
Parvez and Akbar added 41 runs in the seventh wicket stand. This partnership helped Bangladesh to stay in the race. They looked so determined until Parvez tried to drive Jaiswal to the cover area but Akash Singh took a brilliant catch. This dismissal came as a big blow for the junior Tigers.

But in the eighth wicket, Rakibul Hasan partnered Akbar with a great concentration. They added 40 runs before the rain came in and interrupted the game for 10 minutes. After that unexpected break, Bangladesh’s revised target was set to 170, which became seven off 30 after the rain.

Akbar and Rakibul came back and scored those seven runs off seven balls, and the created the history. Akbar and Rakibul added 27 runs in the eighth wicket stand to ensure the win. While Akbar remained unbeaten for 43 off 77 and Rakibul also remained not-out for 9 off 25 balls.

Earlier, riding on the tremendous bowling effort, Bangladesh restricted India for 177 in 47.2 overs after opting to bowl first winning the toss. The junior Tigers were tremendous with the ball in the first powerplay when they conceded only 23 runs taking a wicket.

Opening bowling-pair Shoriful and Sakib were very accurate in their respective first spell. Shoriful conceded only seven runs in his three overs while Sakib gave away nine runs in his first five overs with three consecutive maidens.

Bangladesh managed to hit the Indian batting line in the seventh over of the innings when Divyansh Saxena tried to drive Avishek Das towards the cover area, but the ball was moving away from his body and flew to the point where Mahmudul Hasan Joy took an easy catch.

The wicket was the result of putting continuous pressure on the Indian openers. Before falling prey to Avishek, Saxena scored only two runs off 17 deliveries.

In the second wicket, Yashasvi Jaiswal and Tilak Varma added 94 runs on the board. But it was not enough to put the pressure back to Bangladeshi bowling attack who were disciplined to keep the economy rate low. India had to bat to 28.2 overs to reach the 100-run mark.

Sakib brought the breakthrough in the 29th over removing Tilak for 38 off 65 balls. The ball outside off stump and Tilak went to cut away but fell short at the boundary as Shoriful took a brilliant catch.

Adding only 11 runs after the dismissal of Tilak, left-arm spinner RakibulHasan removed Indian captain PriyamGarg for seven. The ball was a flighted delivery and right-handed batsman Priyam just prodded the ball to Sakib who was at the cover area.

In the fourth wicket stand, Jaiswal and wicketkeeper-batsman Dhruv Jurel added 42 runs on the board. This partnership was looking dangerous until Shoriful sent back the best Indian batsman Jaiswal during the 40th over for 88 off 121 with eight fours and one six. In the very next ball, Shoriful scalped the wicket of Siddhesh Veer off a full-toss delivery at the leg-stump. Veer tried to clear to the fine-leg area but failed to connect the ball.

Going to 172 from 156, India lost four wickets. Two of them were taken by Shoriful, two fell by run-out efforts and the other two were taken by Avishek. India eventually ended on 177 all-out in 47.2 overs.

Avishek bagged three wickets for 40 runs while Shoriful and Shakib took two wickets each in the match, and RakibulHasan took one wicket as well.

Bangladesh now needs to score at an average of 3.56 runs. If they Junior Tigers manage to touch the Target of 178 runs, they will be the first Bangladesh side to win an ICC event.