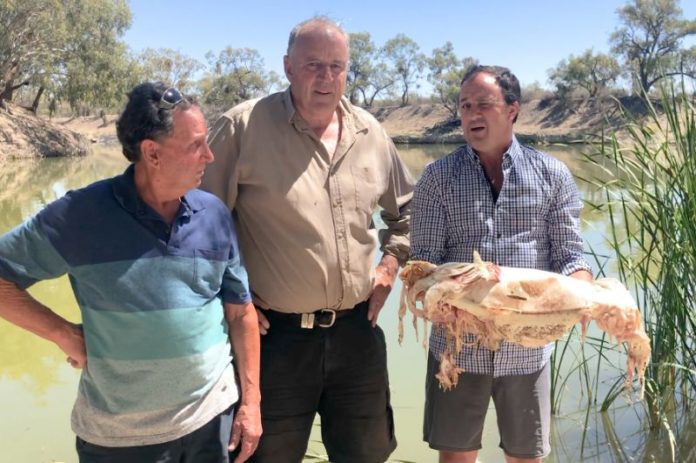 The viability of a key river that feeds into Australia’s biggest water system is under threat if poor conditions that killed millions of fish are not improved within six months. The scientists warned today.
The management of the Murray-Darling River system, which stretches thousands of kilometres across several states and supplies Australia’s food bowl, has been under close scrutiny following three mass fish deaths in December and January.
Authorities said millions of fish died in the Darling River events, blamed on low water flow and oxygen levels in the river as well as possibly toxic algae.
Leading scientists who studied the three bouts of kills said that while a severe drought plaguing inland eastern Australia contributed to the deaths, there were also “serious deficiencies in governance and management” of the river network.
“Our review of the fish kills found there isn’t enough water in the Darling system to avoid catastrophic outcomes,” said Craig Moritz, chair of the independent expert panel commissioned by the opposition Labor Party to investigate the deaths.
He said an analysis of rainfall and river flow data over recent decades points to “excess water extraction upstream” in the agricultural regions of Queensland and New South Wales (NSW) states.
If urgent steps are not taken within six months to increase the flow of water, the expert report said, the “viability of the Darling” as well as the communities that depend on it for their livelihoods would be under threat.
Authorities in 2014 launched a vast Murray-Darling Basin Plan to manage water sharing and usage along the length of the system, which runs through five states and territories.
Last month a Royal Commission launched by South Australia state accused officials of “maladministration”, “negligence” and “unlawful” actions in implementing the plan.
Environmental activists and many residents living along the lower reaches of the Murray-Darling system have put much of the blame on abusive water extraction for irrigation by agribusinesses, including major cotton farms in Queensland and NSW.
But officials of Australia’s conservative federal government have focused on the impacts of prolonged drought and an unprecedented heat wave during this southern summer as the primary causes of low water flow in the Darling River.
Federal Environment Minister Melissa Price said Monday that “significant rainfall” was needed to alleviate the poor water quality and that release of more water into the system from upstream dams would not improve the conditions, reports AFP, Sidney.