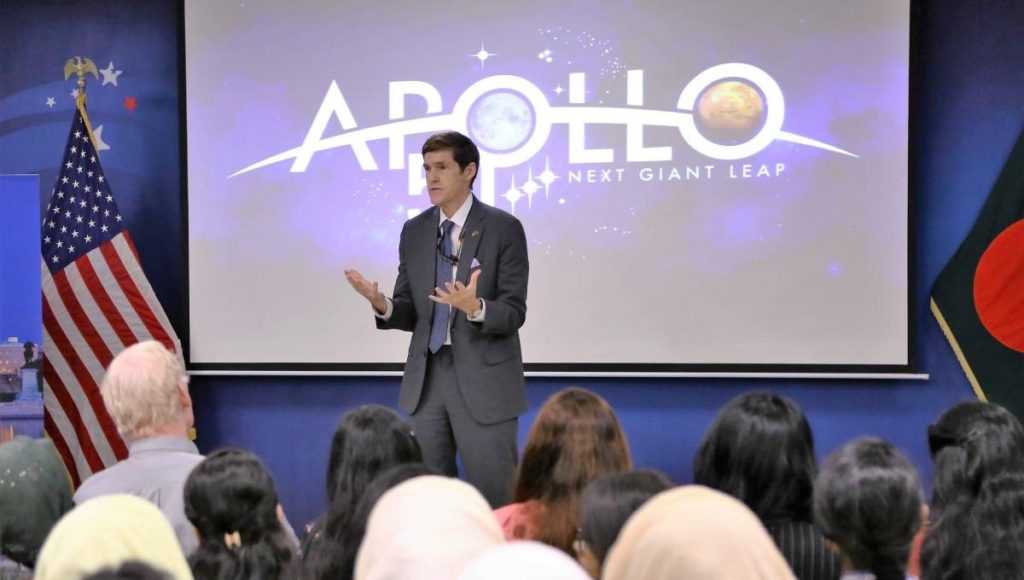 Dhaka, July 24 (UNB) – US Ambassador to Bangladesh Earl R Miller on Tuesday attended a daylong series of programes at the American Center to mark the 50th anniversary of Apollo 11 Moon landing.

In his opening remarks, he referenced Neil Armstrong’s famous quote – “That’s one small step for [a] man, one giant leap for mankind” – to highlight the achievement as a landmark event for the humanity.

Throughout the day, nearly 400 students and visitors participated in 10 programmes, including talks by Bangladeshi-American Nasa engineers, female Bangladesh Air Force pilots, a visiting US science envoy, and robotics instructors, the embassy said on Wednesday.

EducationUSA staff encouraged students to study science and technology at US universities and join the nearly 7,500 Bangladeshi students already studying in the US.

Between programmes, visitors viewed an exhibit of Nasa photos and replica historic documents from the Apollo 11 mission and the subsequent “Giant Leap” world tour by the Moon men including Bengali and English newspaper clippings.

At the bimonthly Music Buzz at the American Center on July 22, the band Uncertainty Principle played Moon-themed music to a full house while more than 44,000 viewed remotely through Facebook Live at @bangladesh.usembassy.

To celebrate the 50th Anniversary, the US Embassy organised 50 programmes from July 20-25 at six American Spaces – the American Center in Dhaka, the Edward M Kennedy Center for Public Service and the Arts in Dhanmondi, and the American Corners in Chattogram, Khulna, Rajshahi, and Sylhet.