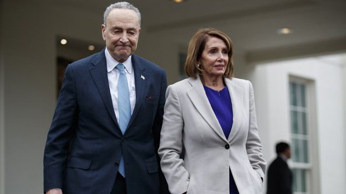 The Speaker of the US House of Representatives, Nancy Pelosi, has launched a scathing attack on President Donald Trump, hours after he announced the US would halt funding to the World Health Organization (WHO).“Americans must ignore lies and start to listen to scientists and other respected professionals in order to protect ourselves and our loved ones,” she said in a statement.
She said the president “ignored… warnings, took insufficient action and caused unnecessary death and disaster”, adding that shortages of tests and protective equipment were threatening lives.
“There are important decisions ahead,” she went on to say. “But if we are not working from the truth, more lives will be lost, economic hardship and suffering will be extended unnecessarily and our children will not be safe, happy and learning.”
Social embed from twitter via BBC News