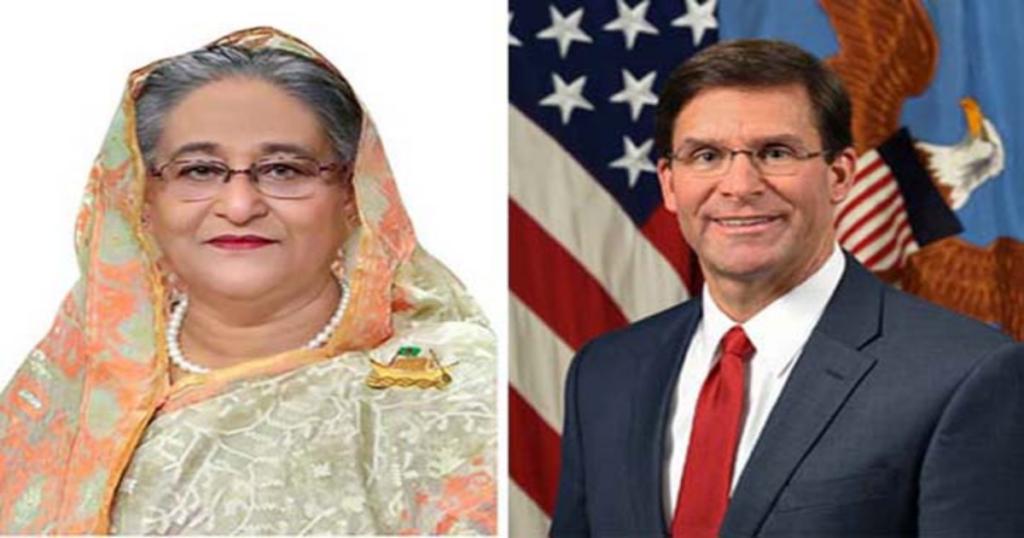 Dhaka, Sept 11 – The USA has assured Bangladesh that it will continue its support to bring about a peaceful resolution to the protracted Rohingya crisis.
The assurance came during a phone call by US Defence Secretary Mark Esper to Prime Minister Sheikh Hasina on Friday.“The US defence secretary phoned Prime Minister Sheikh Hasina this evening and assured her of continuing US support in bringing a peaceful solution to the Rohingya problem,” PM’s Press Secretary Ihsanul Karim said.
He said that the prime minister also sought the US defence secretary’s support in repatriating Rashed Chowdhury, Bangabandhu’s fugitive convicted killer, who is now residing in the USA.
Secretary Esper assured the premier of extending cooperation in this regard, the press secretary said.
Secretary Esper said that his government stands ready to offer any help to Bangladesh in handling flood or any other natural disaster that the country might face.
The press secretary said the US defence secretary expressed his appreciation for the generosity shown by Bangladesh on the Rohingya issue and thanked Prime Minister Sheikh Hasina in this regard.
Secretary Esper talked with the premier about the range of defence cooperation existing between Bangladesh and the USA.
The US defence secretary thanked Prime Minister Sheikh Hasina for extending cooperation during the coronavirus pandemic that hit the USA hard.
Prime Minister Sheikh Hasina expressed condolence for the loss of lives in the USA and praised the support provided by the USA to Bangladesh in handling the coronavirus pandemic.
The prime minister and the US defence secretary hoped that the two countries will continue to work closely in facing the emergency situation caused by the COVID-19 pandemic, Ihsanul Karim said.
Secretary Esper lauded the role of Bangladesh as the number one troop-contributing country in the UN Peacekeeping Operations.
He expressed sadness for the damage of a Bangladesh Navy Ship in the deadly bomb blast in Beirut Port in August.
The US defence secretary hoped that Bangladesh will continue to play its “productive role” in peace-building with the Peace Keeping Forces and informed that the US will continue its support in this regard.
The Prime Minister talked about the upcoming US election and hoped that the elections would be held in a befitting manner.
Sheikh Hasina and Esper agreed that both the government will continue senior-level dialogues and discussion to enhance cooperation in the defense sector.
According to a US Embassy press release, during the call, Secretary Esper commended the Prime Minister for Bangladesh’s response to the COVID-19 pandemic and the recent goodwill missions to its neighbours.
The two leaders discussed their shared commitment to a free and open Indo-Pacific that ensures the sovereignty of all nations, and specific bilateral defence priorities including maritime and regional security, global peacekeeping, and initiatives to modernise Bangladesh’s military capabilities.
Both leaders expressed their commitment to continue building closer bilateral defence relations in support of shared values and interests. – UNB