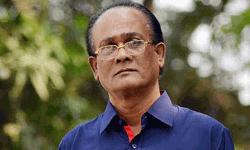 Popular film actor Khalilur Rahman Babor passed away at a hospital in Dhaka today  morning. He was 67.
Babor, also the director and film producer, breathed his last around 9:10am at Square Hospital where he had been undergoing tretment since August 22 after cardiac arrest, Bangladesh Film Directors’ Association organising secretary Kabirul Islam Rana confirmed.
He said, the actor had been suggering from gangrene disease for a long time.
His first namaz-e-janaza will be held on Bangladesh Film Development Corporation (BFDC) premises after ASR prayers. Then the body will be taken to his Kalabagan residence where his second funeral will be held.
After that, Babor will be buried at Mirpur Shahid Buddhijibi Koborsthan.