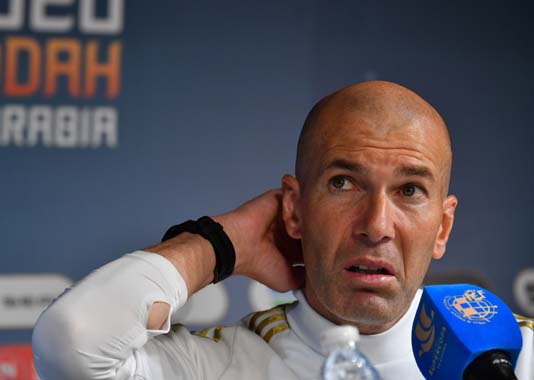 Real Madrid coach Zinedine Zidane said his team is solely focused on lifting the Spanish Super Cup trophy ahead of this week’s revamped four-team competition taking place in Saudi Arabia.“We’re not coming here for a walk,” Zidane said at a news conference Tuesday, on the eve of his team’s semi-final against Copa del Rey holders Valencia in Jeddah.
“It’s the first edition in Saudi Arabia and the competition is a great hope. It’s an important competition and we want to give our all to play a good match tomorrow (Wednesday),” said Zidane.
“It’s a one-off match. It’s not like playing in La Liga. We’re both playing away and it’s just one match. Everything changes but our mentality, it doesn’t change.”
Real and Valencia will be joined by Barcelona and Atletico Madrid in Saudi Arabia, amid controversy over a tournament held far from home in a country long-condemned for its record on human rights.
Spanish media reported only nine percent of the 12,000 tickets set aside for the four competing clubs had been purchased.
However, the three fixtures at the 62,000-capacity King Abdullah Stadium are expected to be sold out.
Barcelona play Atletico on Thursday with the winners of the two semi-finals to meet Sunday in the final.
Real will be without the injured Eden Hazard, while neither Karim Benzema, their top scorer, nor Gareth Bale have made the trip due to fitness problems.
“There are no favourites. The four teams which are here are the four favourites to win it,” said Zidane. “The only thing I’m thinking about is our match tomorrow. It’s a semi-final, but for us, it will be a final.”
Luka Jovic has scored just once for Real since his move from Eintracht Frankfurt in July but the Serbian forward is set to lead the attack in the absence of Benzema.
“Luka Jovic, he’s the future. You have to take it slowly with him,” said Zidane. “He’s a young player who wants to learn and play. He can score goals, but what interests me is the complete player he can become.
“He’s only been with us for five or six months, so a bit of calm is needed,”reports AFP, Jdddah, Saudi Arabia.