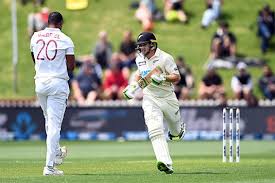 WELLINGTON – An expensive start blossomed into a fruitful session for the West Indies as New Zealand reached 82 for three at lunch on day one of the second Test in Wellington on Friday.

Will Young was holding the innings together on 26 with Henry Nicholls on two at the Basin Reserve. Everything was stacked in the West Indies’ favour when Jason Holder won the crucial toss and put New Zealand in to bat on a verdant strip and with a howling gale behind Shannon Gabriel and the new ball.

Gabriel, in his 50th Test, initially struggled to find a consistent line and was smacked for 21 off his first two overs.

But once he settled, he was almost unplayable and claimed his first wicket when he bowled Tom Blundell for 14 with a good length that pitched outside off and zipped sharply back.

The return of fit-again wicketkeeper BJ Watling had seen Blundell returned to his usual opening slot while Young moved to number three following the late withdrawal of Kane Williamson with the birth of his first child imminent.

The West Indies made two changes from the first Test with debut caps to Chemar Holder and Joshua da Silva, in for Kemar Roach and Shane Dowrich, and the pair combined to dismiss Tom Latham for their maiden wicket.

New Zealand stand-in skipper Latham, who survived a painful crack on the elbow from Gabriel, reached 27 before he was beaten by a ball that moved off the wicket and sent a faint edge to the keeper.

Ross Taylor took several blows to the body before returning fire with a four and three off consecutive balls from Chemar Holder.But it was a short-lived fightback with Taylor adding only two more before he was caught behind to give Gabriel his second wicket.

At lunch, Gabriel had the figures of two for 29 with only eight runs off his last seven overs.BSS/AFP