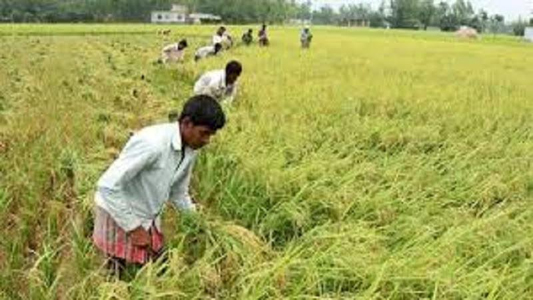 Rajshahi, July 2: Farmers are now very much pleased with the present lucrative market price for the latest harvested Boro paddy in the entire region including its vast Barind tract.
After getting the profitable price of their paddy the farmers are seen bustling with farming of aush and transplanted aman paddy with more attention.
Wali Khan, 48, a farmer of Shahabdipur village under Godagari Upazila, said Zirashail variety paddy is being sold at TK 1,000 to 1,050 per mound while Brridhan-28 at TK 900 to 950 per mound at present against TK 700 and TK 650 respectively in corresponding time of the previous year.
He said he had cultivated Zirashail paddy on two bighas of land and got 48 mounds of paddy. He sold ten mounds of paddy at TK 1,030 per mound a few days back. He said the prevalent selling price rate was over expectation to the farmers.
This time, there is no problem of selling paddy as the traders and millers are purchasing paddy from door to door of the grassroots farmers instead of wholesale markets.
“I have cultivated aush paddy on 30 bigha of land this time against last year’s 20 bigha after getting a satisfactory price of boro paddy,” said Nazmul Alam, a farmer of Jamin Sidhair village under Tanore Upazila.
Atnu Sarker, Sub Assistant Agriculture Officer, said a pleasant atmosphere has been prevailing among farmers as many of those are dependent on paddy for their livelihood.
“The enhanced market price will contribute a lot towards boosting paddy production in the days to come, he added.
Farmers have produced 34.23 lakh tonnes of Boro rice from 8.03 lakh hectares of land in the division during the last harvesting season.
As part of its ongoing Boro rice procurement drive, the government has, so far, purchased 1,09,191.79 tonnes of boro rice and 27,914 tonnes of paddy in the division during the current season.
“We have procured 1,05,068.83 tonnes of boiled rice and 4,122.96 tonnes of non-boiled sunned (Atap) rice till Sunday last,” said Raihanul Kabir, Regional Controller of Food, adding the procurement drive of the rice and paddy is going on in full swing.
He said the government has set a target of procuring 2,39,067 tonnes of boiled rice, 23,664 tonnes of non boiled rice and 1,42,495 tonnes of paddy in the division during the current season.
“We are procuring boiled rice at the rate of TK 36 per kilogram (KG) while non-boiled rice at TK 35 per kg ” he added.
Contracts have been signed with 5,369 millers for collecting 2,37,228 tonnes of boiled rice while 158 other millers for supplying 20,833.49 tonnes of non-boiled rice. The enlisted millers have been supplying rice shortly after the contract was signed.
Presently, the grassroots farmers are happy after getting better yield and market price of their harvested paddy and rice which is also contributing a lot to ensuring food security in the region.
On the other hand, the farmers are now very busy in nursing their well-growing aush paddy and transplantation of aman at present.
The ong oing farming of Aush paddy has exceeded target predicting a record production of the food crop in Rajshahi division during the current season.
The farmers have brought 1,639 hectares more lands under the paddy farming compared to the target set by the Department of Agriculture Extension (DAE) after the best uses of facilities provided by the government.
The DAE has set a target of producing around 7.5 lakh tonnes of Aush rice from 2.52 lakh hectares of land in all eight districts in the division.
But, the farmers cultivated the paddy on around 2.54 lakh hectares of land generating hopes of additional rice production that will ultimately help coping with the Covid-19 pandemic situation.
Sources said government incentives; technological assistance, high yielding seeds, conducive climatic condition, frequent rainfall and satisfactory yield and market price of the newly harvested Boro paddy and rice are being adjudged as the major factors of exceeding the farming target.
Sudhendra Nath Roy, Additional Director of DAE, Rajshahi said the government has adopted diversified steps including incentives and technological support to promote the aush rice farming.
Apart from this, the DAE has set a target of producing around 22.19 lakh tonnes of transplanted Aman rice from 7.67 lakh hectares of land in Rajshahi division this season.