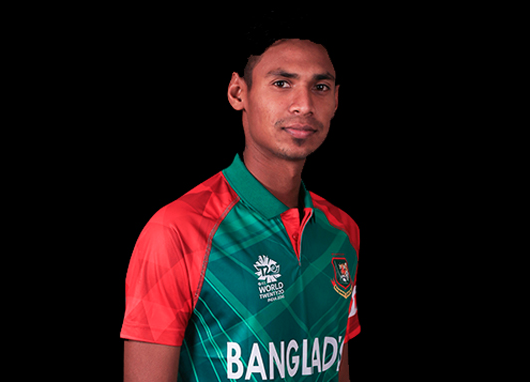 DHAKA-Young fast bowler Shoriful Islam said he savours his competition with the senior pacer Mustafizur Rahman as it helps him hone his skill more and keeps the side in a position of dominance in the Bangabandhu T20 Cup.

Shoriful, the member of the Under-19 World Cup winning, is playing with Mustafizur in Gazi Group Chattogram. Like Mustafizur, Shoriful is also a left arm bowler and the two are having a great time with the ball for the side.

Mustafizur has always been very effective in T20 cricket and this time in Bangabandhu T20 Cup, it is no exception as he continues a tremendous bowling.

But Shoriful is not also far away despite lacking experience. He showed a promising sign to be a future start by matching with Mustafizur in terms of skill and aggression.

Shoriful however is very excited to get Mustafizur as a teammate as he stated that the senior pacer played a key role in his success.

“I am enjoying playing with Mustafizur Bhai. He always comes up with good advice for me in every over,” Shoriful said here today.

“Even at the end of the match, discussion goes on between us about how I can bowl according to the match situation. It’s fun to play with him and talk about bowling. I am also enjoying a good competition between us,” he added.

Due to the performance of the left hand bowlers’ duo, Chattogram is flying high in the Bangabandhu T20 Cup as they still kept them unbeaten after four matches.

Mustafizur has contributed the most with 12 wickets. Shariful is after that with eight wickets. While Mustafizur’s economy rate in 5.12, Shoriful’s 7.92.

But what keeps team management pleased is that Shoriful is showing aggression with new ball.

The pacer said that he is getting success by being able to deliver dot ball regularly. He added that he wants to move forward with the same plan.

“I really enjoy to bowl with new ball. Along with that my aggression is having a great effect. In bowling, my plan is to do dot ball. I succeed in doing that,” Shoriful concluded.BSS