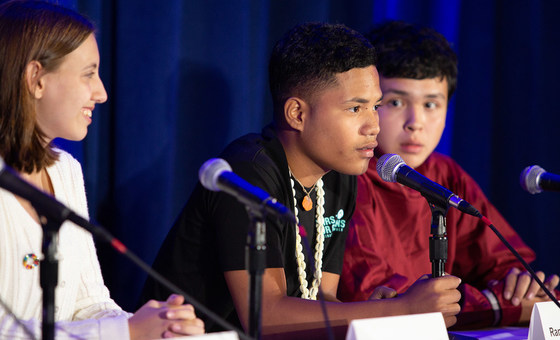 24 September 2019, Climate Change – The failure of governments to act on the climate crisis, constitutes a violation of children’s rights, according to a landmark complaint presented to the UN Committee on the Rights of the Child by 16 youth activists.Swedish teenager Greta Thunberg who hit out at global inaction during Monday’s Climate Action Summit, and American Alexandria Villaseñor – who has been spending her Fridays on climate strike outside UN Headquarters in New York – have been joined by others aged eight to 17, from a dozen different countries including Brazil, India, Nigeria, France and South Africa, in signing the complaint.
The group alleges that under the UN Convention on the Rights of the Child, the Committee should order Member States to take action to protect all children from the devastating impacts of climate change.
“Change needs to happen now if we are to avoid the worst consequences. The climate crisis is not just the weather. It means also, lack of food and lack of water, places that are unliveable and refugees because of it. It is scary”, said Ms. Thunberg, at a press conference hosted by the UN Children’s Fund, UNICEF, on Monday at UN Headquarters.
Although it supports their complaint, the agency is not a party to it and will not play any part in the Committee’s decision.
“Thirty years ago, world leaders made a historic commitment to the world’s children by adopting the Convention on the Rights of the Child. Today, the world’s children are holding the world accountable to that commitment,” said UNICEF Deputy Executive Director Charlotte Petri Gornitzka.
“We fully support children exercising their rights and taking a stand. Climate change will impact every single one of them. It’s no wonder they are uniting to fight back.”
The complaint was filed through the Third Optional Protocol to the Convention on the Rights of the Child, a voluntary mechanism which allows children, or adults on their behalf, to appeal directly to the United Nations for help if a country that has ratified the Protocol fails to provide a remedy for a rights violation.
The UN agency added that it supports the child petitioners exercising their right to bring complaints via the communication procedure of what is known as the Third Optional Protocol.
Last Saturday, students and activists met at United Nations Headquarters for the first-ever youth Climate Summit, demanding world leaders “stop wasting time” and work harder to curb carbon emissions.
About the Convention on the Rights of the Child
Adopted on 20 November 1989, the Convention on the Rights of the Child (CRC) is an international human rights treaty outlining the civil, economic, social, political and cultural rights of children – without discrimination of any kind. It is the most widely ratified human rights treaty in history. Complaints filed under the CRC’s Third Optional Protocol are adjudicated upon by the Committee on the Rights of the Child – a group of independent experts. The Committee is able to receive complaints from children, groups of children or their representatives against any State that has ratified the Protocol. – UN News