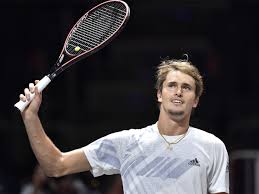 BERLIN – Fresh from winning the ATP tournament in Cologne last weekend, Germany’s Alexander Zverev reached the quarter-finals of the second week on the Rhine with a tough, three-set triumph over John Millman of Australia on Wednesday.

“In the first set I thought I played flawlessly, but then I wasn’t focused at the beginning of the second,” Zverev admitted.

“John is someone who has beaten top players before, I thought I did a poor job serving, but got the win somehow.”

On Thursday, Japan’s Yoshihito Nishioka, who saw off Britain’s Kyle Edmund on Tuesday, will play Germany’s Jan-Lennard Struff for a last-eight place.

Seventh-seed Struff beat Italy’s Marco Cecchinato 6-3, 6-1 in the first round.

The 20-year-old Canadian, whose defeat to Zverev was his sixth straight defeat in an ATP final, recovered from losing the first set to seal a 4-6, 7-6 (7/2), 7-6 (7/4) second-round win over Egor Gerasimov of Belarus late Wednesday.BSS/AFP