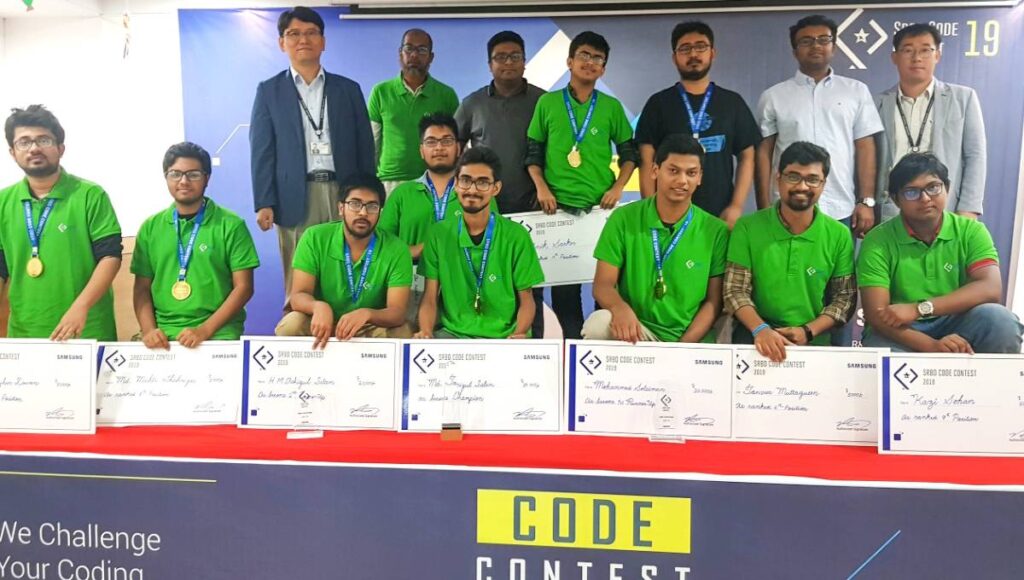 Samsung Research & Development Institute Bangladesh (SRBD) awarded 10 university students for winning a Coding Contest held in the city in between June 21 and August 31.
Over 900 university students participated in the second season of Coding Contest organised by SRBD, aiming to develop the knowledge and skills of the students and to bridge the gap between academia and industry, said a press release.
The contest was held in three stages at SRBD premises in the city.
The first stage was held among the participants from 52 universities via an online elimination round.
The participants were required to solve algorithmic problems using C/ C++/ Java within a stipulated timeframe. Then from the second qualifying round (with 110 participants), 50 contestants moved onto the final round and then 10 most brilliant coding minds of the year emerged from this contest, it said.
The champion of the Coding Contest is Md Tariqul Islam from Jahangirnagar University (JU), who received a medal, champion crest and cash prize of TK 50,000.
The 2nd and 3rd prize winners are Mohammad Solaiman and H M Ashiqul Islam. Both of them are from Buet (Bangladesh University of Engineering and Technology) who won Tk 30,000 and TK 20,000 respectively.
The 4th prizes were given to 7 participants – Tanveer Muttaqueen (Buet), Hasin Rayhan Dewan Dhruboo (Buet), Mahmud Sajjad Abeer (Daffodil International University), Tariq Salam Sojol (Buet), Kazi Sohan (JU), and Anik Sarkar (Buet.
These ten will also get an opportunity to work and develop their career at SRBD, one of the leading MNCs (Multinational Companies) in the country.
Addressing the award giving ceremony held recently at SRBD premises in the city, Wonmo Ku, Managing Director ofSRBD encouraged the participants to keep up the good work and continue partaking in this type of programming contest which shapes the competencies of Bangladeshi youth, reports UNB.