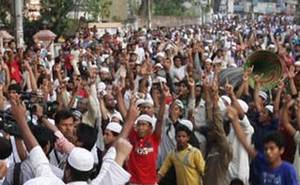 Sixteen cases have so far been filed in connection with the May 5 city violence unleashed by Hefajat-e-Islam activists.Of the cases, 10 were filed with Paltan Police Station while the rest with Motijheel police.
Police filed five of the cases while the affected people lodged the remaining ones, said assistant deputy commissioner (ADC) of Dhaka Metropolitan Police (Motijheel Zone) Mehedi Hasan. He said more cases will be filed in connection with the violence.
On May 5, three people were killed in clashes between Hefajat men and law enforcers at different parts of the capital.
The Hefajat men also went on a rampage and torched around 70 vehicles and many financial institutions and shops in different city areas, including Baitul Mukarram Market.
Meanwhile, a Dhaka court on Tuesday placed Hefajat-e-Islam Junaid Babunagri on a nine-day remand in a case filed over the violence. He was arrested on Monday.
Forty Hefajat-e-Islam activists were also taken on a two-day remand in connection with violence.
Ramna and Shahbagh police arrested the Hefajat men on Sunday on charges of obstructing police from discharging their duties, and vandalising and torching vehicles in the city.
Later, they were shown arrested under Section 54 of the Bangladesh Penal Code. UNB