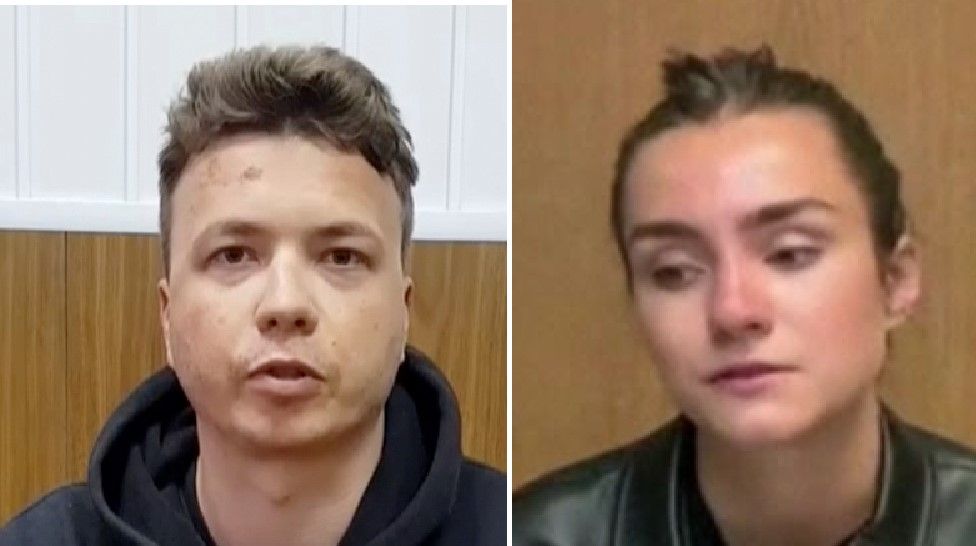 The families of a dissident journalist and his girlfriend, held after a plane was diverted to Belarus, have spoken of their concern for their safety.
Roman Protasevich and his Russian girlfriend Sofia Sapega are now in detention.” I’m calling on the whole international community to save him,” said his mother Natalia Protasevich.
A video of Ms Sapega was released on Tuesday as authorities said they would hold her for at least two months.
In the video, Ms Sapega says she edits a Telegram channel which publishes personal information of Belarusian policemen.
However, it is likely she is speaking under duress.
A lawyer for Ms Sapega has said that she will be detained for at least two months.
Ms Sapega and Mr Protasevich were detained on Sunday, when a plane flying from Athens to Vilnius, in neighbouring Lithuania, was diverted to land in Minsk, the Belarusian capital.
Western countries accuse Belarus of hijacking the Ryanair plane that was rerouted over a supposed bomb threat.
Several European airlines have said that they will not fly over Belarus as a result.
“Today Sophia was interrogated. She was accused of committing a criminal offence. A preventive measure was chosen – detention for a period of two months,” her lawyer, Alexander Filanovich, told the BBC’s Russian service on Tuesday.
Ms Sapega is now in a KGB pre-trial detention centre in the Belarusian capital, he said.
In the video, Ms Sapega states that she is the editor of the Black Book of Belarus Telegram channel, which publishes the personal data of the country’s security forces.
But Ms Sapega’s mother cast doubt on how freely her daughter is speaking in the video, released by a pro-government Telegram channel.
“Even my friends called me and said … this is an unusual manner for her,” she told the BBC. “She sways, eyes in the sky – as if afraid of forgetting something.”
“I enlarged [the video] as much as possible – it seems that [she looks] okay. We are now packing warm clothes, we will go to Minsk. I want to try to give her a parcel – I saw she only had a thin jacket.”
It comes after Belarus authorities on Monday released a video of Mr Protasevich that appears to have been recorded under duress.
He faces charges related to his reporting of last August’s disputed election and subsequent crackdown on mass opposition protests and has said he fears the death penalty after being placed on a terrorism list.
Belarus is the only European country that still executes prisoners.
Natalia Protasevich, the 26-year-old’s mother, told the AFP news agency that she has not slept since her son’s arrest.
“I’m asking, I’m begging, I’m calling on the whole international community to save him,” Natalia said, breaking down in tears during an interview in Wroclaw, southern Poland.
“He’s only one journalist, he’s only one child but please, please… I am begging for help. Please save him! They’re going to kill him in there!”
She added that her son is a “fighter for justice”.
“They sent a fighter jet to get this young man! It’s an act of terrorism, I don’t think you can call it anything else. He’s been taken hostage. This is an act of pure revenge!” she said.
Her voice breaking, she added: “My son, this young man just wanted to tell the truth about the situation. He didn’t do anything wrong.”
How were the couple arrested?
Belarus sent a fighter jet to force Ryanair flight FR4978 – which had departed from the Greek capital, Athens and was bound for Vilnius in Lithuania – to land, claiming there was a bomb threat. It touched down in the capital Minsk at 13:16 local time (10:16 GMT) on Sunday.
Police then took Mr Protasevich away when the plane’s 126 passengers disembarked. The activist, who witnesses said was “super scared”, was arrested along with his girlfriend Sofia Sapega.
On Tuesday, the Belarusian transport ministry released a transcript of a conversation said to be between an air traffic controller in Minsk and a pilot on Sunday’s Ryanair flight.
According to the transcript, which has not been independently verified, Belarus suggested several times that the plane should land in Minsk on “our recommendation”.
This appeared to contradict earlier statements from the Belarusian authorities that said the decision to land was made independently by the pilot.
At a meeting in Brussels on Monday, the leaders of the 27 European Union member states called for the overflight ban and promised further economic sanctions. – BBC News