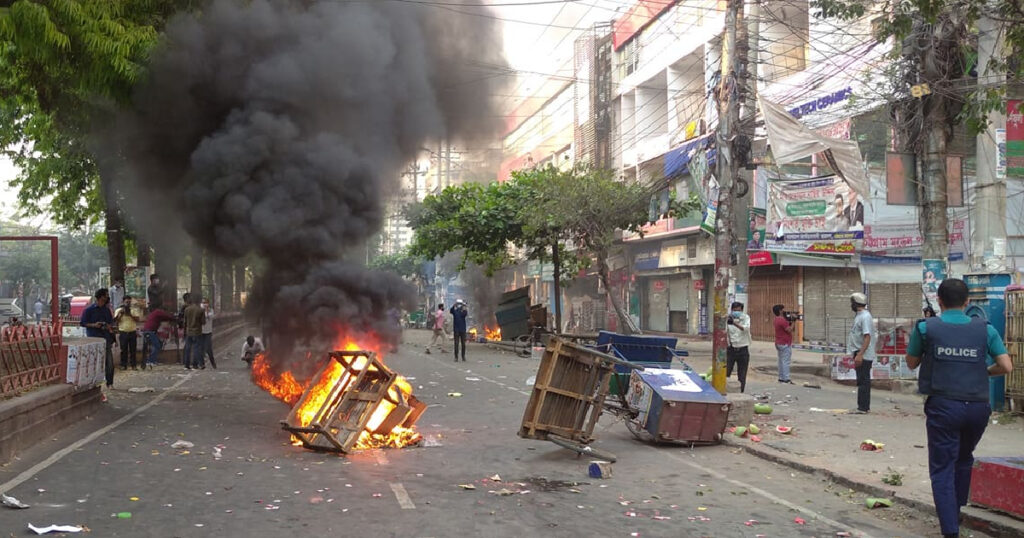 Chattogram, Mar 30 :  Police on Tuesday filed two cases over Monday’s clash between BNP activists and the law enforcers at Kazir Deuri area of Chattogram City.One of the cases was filed under the Special Powers Act and the other under the Explosive Substances Act at Kotwali Police Station, said Officer-in-Charge Nizam Uddin.
Police accused 57 BNP leaders and activists, including divisional Organising Secretary Mahbubur Rahman Shamim and President of Chattogram City unit Dr Shahadat Hossain, in the two cases. Sixty other anonymous suspects were also accused, he said.
On Monday, at least 20 people, including policemen, were injured in a clash between BNP activists and law enforcers at Kazir Deuri.
The clash broke out around 4pm and lasted for an hour.
BNP activists torched several vehicles near Nasiman Bhaban. Police fired several shots to control the situation.
BNP Office Secretary Idris Ali on Monday said BNP activists were preparing for a peaceful rally and accused police of obstructing them and firing at them as they tried to reach BNP office.
Fifteen BNP activists were injured in the firing and 50 others were wounded during police action, he claimed.
OC Nizam accused BNP activists of attacking police with brick chips when the law enforcers asked them to hold their rally in a safe place instead of the road.
Police detained BNP leader Shahadat after the clashes.
BNP was holding the rally demanding punishment to policemen involved in shooting incidents in Chattogram and Brahmanbaria during anti-Modi protests that left at least nine people dead, including several Hefazat-e-Islam activists, reports UNB.