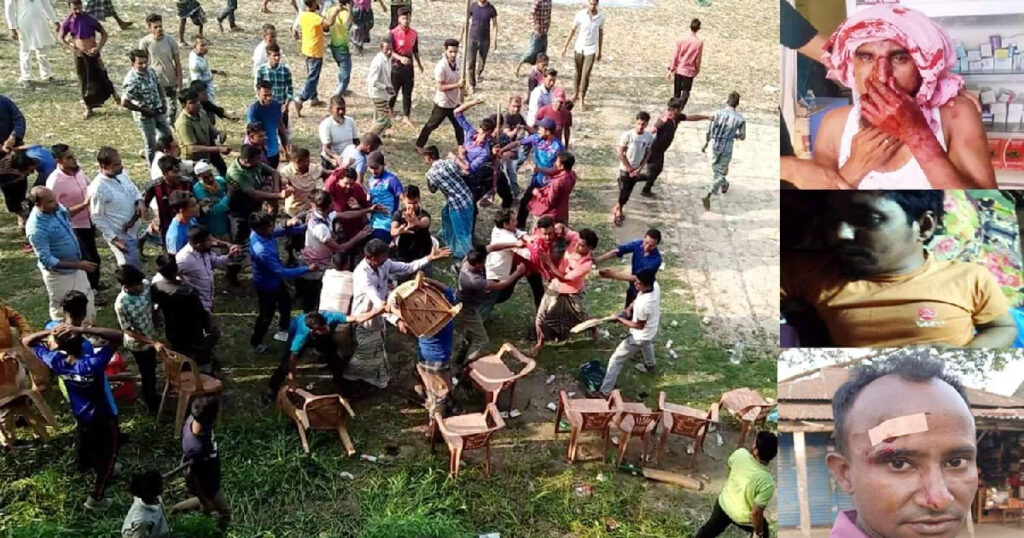 Sylhet, Mar 23 – At least 20 people were injured in a clash between two groups of people over a cricket match in Bishwanath Upazila of Sylhet. The clash took place between residents of villages on Tuesday (March 23rd) afternoon.
According to eyewitnesses, the semi-final match of the Union Cricket League, organised by the Khazanchi Union Cricket Association, was played on Tuesday afternoon between the teams of Gomragul and Tabalpur wards.
After the break, local UP chairman Talukder Gias Uddin and some other guests left the venue. Whether this acted as the trigger is unclear, but within minutes an on-field clash ensued between two opposing players. People of both the villages in the spectator gallery entered the field and got involved in the argument.
Meanwhile, as the clash continued, several furniture on the stage and in the adjacent Agriculture Bank were looted and vandalised.
Upon receiving the news, police rushed to the spot and tried to remove the people from both the villages to bring the situation under control. The people of Tabalpur village got angry and started throwing brickbats at the police. At that time, the people of Tabalpur village were chased by the police. However, no casualties were reported. Currently the situation is calm and police are on the spot.
According to sources, there has been tension between the two sides for about a month over the semifinal match between Gomragul and Tabalpur villages. At one stage, the matter was settled in the presence of dignitaries of the area and the organising committee of the game called the match.
Many in the area commented that since the game was being played between the players of the two villages from the east, it would have been possible to avoid this unfortunate incident if the police were informed before the game.
In this regard, Khazanchi Union Parishad Chairman Talukder Gias Uddin said, “Today’s game was held on the basis of everyone’s opinion after the previous dispute between the two villages over the game was settled in the presence of dignitaries of the area. I came to the Union Parishad Complex to have tea with the guests in the middle of the game and when I returned to the field after saying goodbye to the guests, I saw not cricket but rather a huge clash between the two sides.
Bishwanath Police Station Officer-in-Charge (OC) Shamim Musa said the situation came under control when police personnel were sent to the spot immediately after receiving the news. Currently the situation is calm. However, police members are still stationed in the area. – UNB