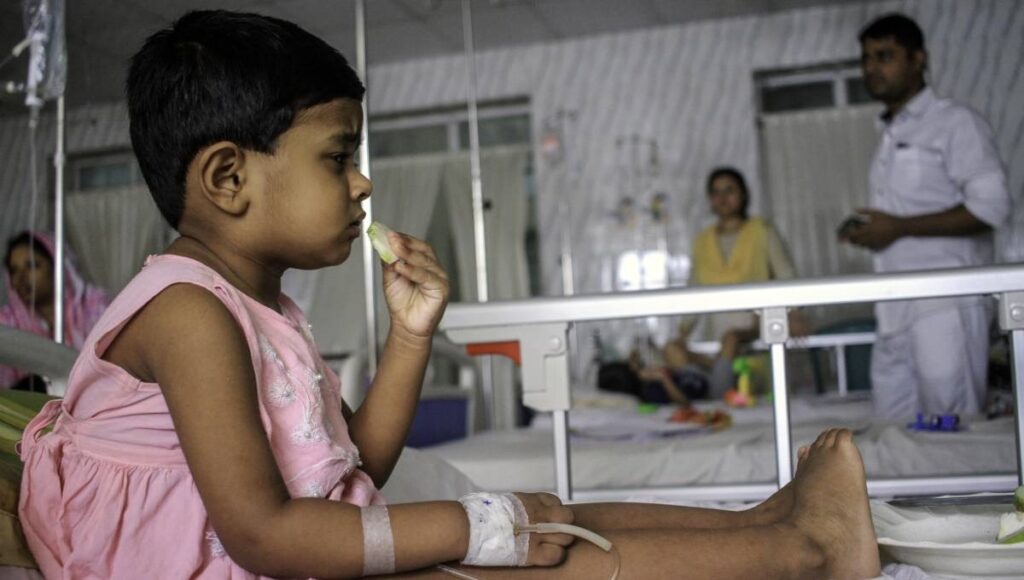 Dhaka, Aug 09 – Three more dengue patients including two children died as hospitals across the country admitted total of 2,002 dengue patients in the 24 hours ending on Friday.Breaking all previous records in the country, the number of recorded cases of dengue in the first eight months this year has hit 36,668, according to the Directorate-General of Health Services (DGHS).
With the latest fatality, the official death toll rises to 29, which is much lower than the unofficial tally of at least 66 deaths this year.
Two deaths were reported in Dhaka and one in Barishal yesterday.
Among the decease –Rifat, 10, son of Khorshed of Jamalpur, died at the Dhaka Medical College and Hospital (DMCH) around 12:30am on Friday. He was admitted to DMCH with dengue fever on August 8 and died while undergoing treatment.
Second dengue-victim was Mehraz Hasan, 8, died at United Hospital yesterday. He was undergoing treatment at the hospital last two days, where he died yesterday.
The third deceased was Mojibor Rahman, 52, general secretary of Barguna Rifles Club, died at Barishal Sher-e-Bangla Medical College and Hospital (SBMCH). He was admitted at the hospital at on Thursday in a critical condition. He was suffering from diarrhea and dengue infections. He died while undergoing treatment. With this, the dengue death toll at SBMCH rose to three.
According to DGHS control room data, the total number of admissions was 18,207 in the first eight days of this month. From January 1 to August 8 this year, at least 27,876 patients were released from hospitals across the country after recovery.
At least 8,763 patients, including children, are currently undergoing treatment at hospitals and of them, 5,076 are in Dhaka city.
Experts said hospitals, both private and state-run, are receiving a large number of dengue patients every day and the number is continuing to rise rapidly, claiming three to four lives per day on an average this month.
The number of dengue patients is expected to increase significantly over the month than that last month, they said.
Doctors said they are facing huge pressure to provide treatment and accommodate the large number of dengue patients in various hospitals across the country every day. It will go out of their control if the dengue cases continue to rise.
“We are receiving a record number of dengue patients from across the country this month. This month, the number of dengue cases is much higher than that of last month,” said Dr Ayesha Akhter, in-charge of the disease control room at the Directorate of Health.
She said the health department has taken several initiatives to control the situation. “If the initiatives taken by the DGHS work properly, hopefully the number of dengue patients will decrease soon,” she added.
Meanwhile, Road Transport and Bridges Minister Obaidul Quader said that the government would be able to contain the dengue menace as mosquitoes did not hold more powerful as beings over humans.
He made the remarks during a visit to the Gabtoali bus stand yesterday to supervise the holidaymakers’ journey home ahead of Eid-ul-Azha.
The minister says that Prime Minister has called for year-long awareness programmes and action plans on Thursday (Aug 8) to check the spread of the mosquito-borne dengue fever.
He said the government was taking all necessary measures to make the Eid journey for home-bound people safe amid the dengue situation and the efforts had intensified with the return of the prime minister.
The minister assured that all concerned departments were ready to tackle the dengue menace and with the arrival of the imported repellents, the situation would improve.—Staff Reporter