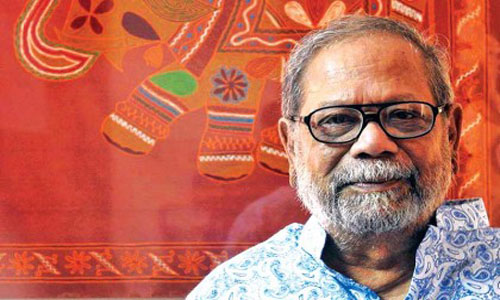 Dhaka, Aug 14: Ekushey Padak winning artist Murtaza Bashir has been admitted to the intensive care unit (ICU) of Evercare Hospital in Dhaka early Friday.Munira Bashir, daughter of the renowned artist, said her father was admitted to the hospital around 1.30 am. He has been suffering from lung and kidney ailments.
“The doctors suggested shifting him to the MICU at around 2.30 am,” Munira said, said bdnews24.com.
“We’re seeking blessings from the people for my father, so that he recovers soon and is able to complete his unfinished works.”
Bashir, 88, is suffering from heart, lung, kidney and old-age ailments. Earlier, he was admitted to the ICU.
Son of Dr Muhammad Shahidullah, a famous linguist, Murtaza Bashir was born in Dhaka’s Ramna in 1932. He was the chairman of the Fine Arts Department at Chattogram University.
A pioneer of surrealistic art, Bashir has done many famous paintings, including ‘Dewal,’ ‘Shahid Shironam,’ and ‘Pakha’.
He did the first linocut painting titled ‘Roktakto Ekushey’. His artworks include mural, block print and others.
Bashir published his anthology of poems ‘Tatka Rokter Khinorekha’ in both Bangla and English. In 1979, he published his first novel ‘Ultramarine.’
He received the Ekushey Padak in 1980 for his contribution to art. He also received the Swadhinata Puroshkar in 2019.