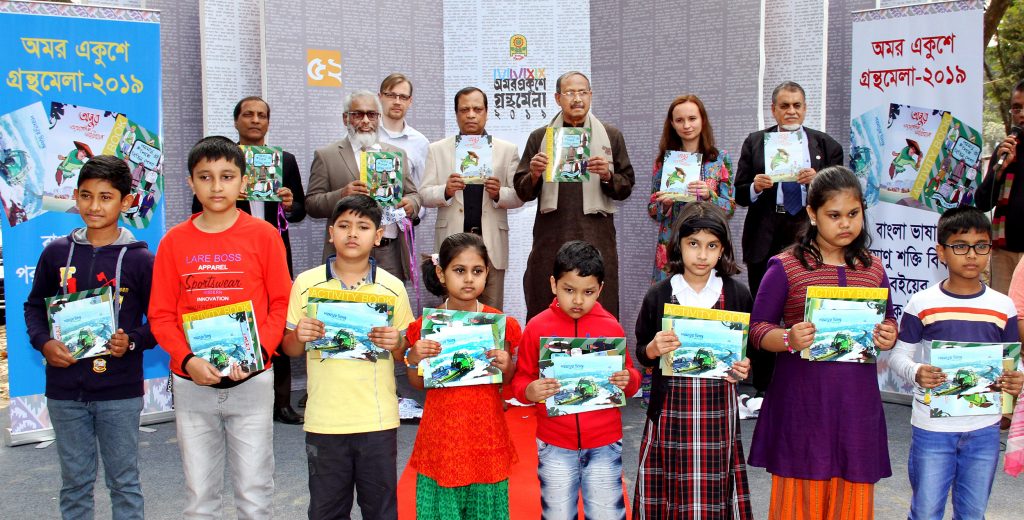 Dhaka, Feb 09 – ROSATOM State Atomic Energy Corporation of Russia and Bangladesh Atomic Energy Commission (BAEC) jointly published three Bangla books on nuclear energy on the occasion of Ekushey Book Fair 2019. “Atomic Horizon”, and “Various Professions in the Nuclear Industry” were translated from language the comic book “Unexpected Adventure of Onu” was written and edited in Bangladesh.
Architect Yeafesh Osman, Minister for Science and Technology (MoST) formally unveiled the books at the “Morok Unmochon Moncho” of the Ekushey Book Fair, today, February 9, 2019 morning. Mahbubul Hoq, Chairman, Bangladesh Atomic Energy Commission (BAEC), Md. Shawkat Akbar, Project Director, Rooppur Nuclear Power Plant Construction Project, Daria Savchenko, ROSATOM Representative were present among others on the occasion.
The main objective of publishing the books is to provide people, especially the young generation with the primary knowledge about the nuclear energy and to clear the misconception about it through highlighting the positive aspects of nuclear technology.
Earlier, ROSATOM and BAEC also translated three popular science books on nuclear energy – “ABC of Nuclear Energy”, “Q&A on Nuclear Energy” and “World of Nuclear Energy” and distributed among the students and general people.
The “Atomic Horizon” book tells us about use of nuclear energy in various sectors. From the book “Various Professions in the Nuclear Industry” readers can know about interesting nuclear profession in the respective sectors. The comic book “Unexpected Adventure of Onu” is about the protest and struggle of a simple science-minded village girl against prejudice on nuclear energy, superstitions and bad social rituals.
The illustrated books are available at the Bangladesh Atomic Commission (BAEC) stalls no- 74 and 75 of the Bangla Academy premises of Ekushey Book Fair.
Under an inter-Governmental agreement between Bangladesh and Russia, ROSATOM is helping Bangladesh in implementing the nuclear power plant at Rooppur of Pabna district. The power plant will have two units, each of 1,200MW capacity. – Press release