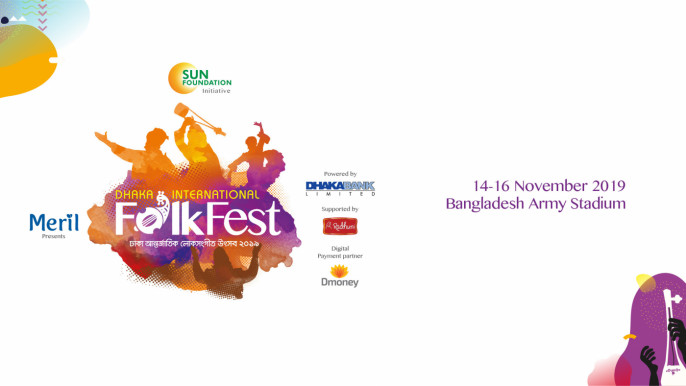 The fifth edition of Dhaka International Folk Fest will begin Thursday evening at Bangladesh Army Stadium.Two hundred artists from six countries will be performing everyday till 12am throughout the three-day festival till November 16.
Foreign Minister Dr AK Abdul Momen will inaugurate the festival as chief guest while Anjan Chowdhury, chairman of Sun Foundation and Sun Communications Limited, will be attending the ceremony.
Dhaka International Folk Fest is a celebration of sheer musical brilliance where myriads of folk artistes from home and abroad perform on a single platform, according to its website.
Shah Alam Sarkar, Fakir Shahabuddin, Chandana Majumdar, Kajol Dewan, Malek Kawal, Kamruzzaman Rabbi, Shafikul Islam and Bhabna Nritya Dol from Bangladesh will perform alongside Daler Mehndi from India, Junoon and Hina Nasrullah from Pakistan, Sattuma from Russia, Chveneburebi from Georgia, Habib Koité & Bamada from Mali to celebrate the spirit of folk music at the festival.
Sun Foundation started the festival. It will be broadcast live on Maasranga Television, reports UNB.