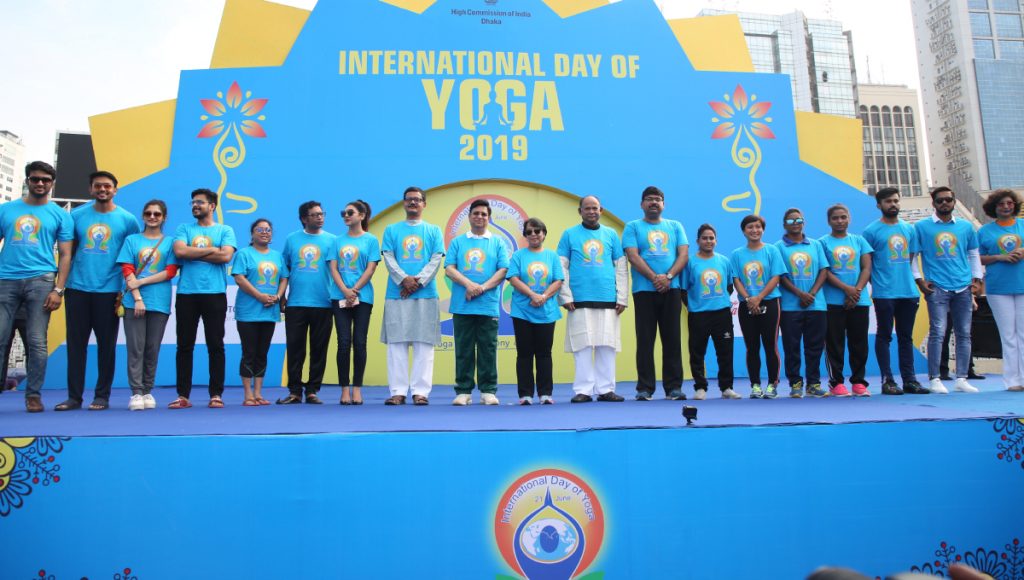 Dhaka, June 21 (UNB) – The 5th International Day of Yoga (IDY) was celebrated by the  Indian High Commission here on Friday with around 7000 people doing Yoga together at the Bangabandhu National Stadium.

The celebrations of IDY commenced with the screening of a video message of Indian Prime Minister Narendra Modi.

Similar events were also organized in other cities of Bangladesh by the HCI and Assistant High Commissions of India.

Apart from the above, various other Yoga organizations and institutes also organized separate programmes, including yoga demonstrations and a mass yoga session, to mark the IDY event.

The United Nations proclaimed June 21 as the International Yoga Day on December 11, 2014.

The resolution establishing the International Day of Yoga was proposed by India and co-sponsored by a record 175 member states.

A total of 175 nations co-sponsored the resolution, the highest number for any UN resolution.

Since 2015, the International Day of Yoga has been celebrated on a large scale in Bangladesh.

Entry to the event was free. All participants received, on first-cum-first-served basis, free yoga mats, t-shirts and water bottles.

Yoga is an ancient physical, mental and spiritual practice that originated in India. The word ‘yoga’ derives from Sanskrit and means to join or to unite, symbolising the union of body and consciousness.