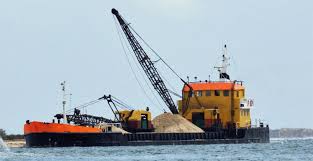 Staff ReporterA Sonargaon mobile court on Monday seized eight dredger workers, Antoprottasa dredger-3 and bulkhead MV Meraj for illegally sand mining without lease from Mehgna river at Nunertek balumohol.The mobile court led by Sonargaon upazila assistant commissioner (Land) KM Al Amin conducted drive at Monday morning and found that they sand mining from Meghna river.
The detainees were identified as Shah Ali, Rupchan, Shohag, Babul, Rashed, Solaiman, Ismail and Ripon.
The mobile court fined to detainees dredger workers one lakh per person; otherwise they have sentenced three month jail in order to mobile court.
On secret information, a police and Coast Guard team raided the spot in Nunertek balumohol area and arrested the workers while they were lifting sand from river, said assistant commissioner (Land) KM Al Amin.
However, Mohammad Zakir, proprietor of Ms Jalal Enterprise, was lifting sand illegally from river without lease almost two months.
During this visit to the areas, the mobile court found that the company installed heavy machineries on Mehgna River and extracted underground sand damaging the environment and agricultural land. Local people have been complaint several times to the administration offices to take necessary action.
KM Al Amin said, leaders of various social organisations also raised their voices against the unabated lifting of sands from different places at Mehgna River.
But none from the local sand lifter has ever bothered to stop the illegal mining resulting large scale damage to environment.
Use of such heavy machineries leading to indiscriminate quarrying and unscientific mining has become a cause of concern as these are changing riverbed charasteristics and exacerbating ing riverbank erosion.
It has also damaged the riverbanks and irrigation schemes in the area, he added.