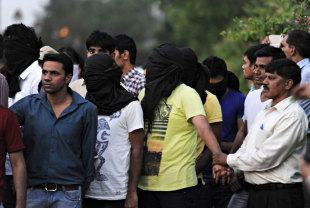 Former Essex all-rounder Ian Pont on Monday evening denied involvement in a match-fixing scandal in Bangladesh, where the former national team­captain Mohammad Ashraful is alleged to have taken bribes to lose.According to media reports in the country, Ashraful is alleged to have been paid around £8,500 by the owner of his Bangladesh Premier League Twenty20 team, Dhaka Gladiators, to lose a match against Chittagong Kings on Feb 2. He is also alleged to have been involved in fixing another match 10 days later, against Barisal Burners, which his team lost by seven wickets.
Relatives of Ashraful were quoted as saying that he had confessed to his involvement in match fixing, after investigators from the International Cricket Council’s Anti-Corruption and Security Unit approached him and told him his team coach, Ian Pont, had detailed his own role in the scandal.
According to Dhaka’s New Age newspaper, Ashraful was paid by cheque by his club but the cheque bounced. His relatives told the newspaper that he had agreed to co-operate with the ACSU investigation in the hope of a lighter punishment. His club owner, Selim Chowdhury, has strongly denied any wrongdoing.
The ACSU are understood to have begun investigating rumours of match fixing in the BPL earlier this year, and focused on the Gladiators’ first two matches in February. Although they lost both, they won the league for the second consecutive season with Pont as coach.
Pont moved into coaching after a mixed career, which also took in a spell in Major League Baseball.
On Monday evening he told The Daily Telegraph that he strongly denied allegations of involvement in match fixing and said he would co-operate with the ACSU investigation. “I categorically deny these allegations and look forward to fully co-operating with the ACSU with its inquiry. In the meantime, I’m not in a position to make any other comment,” he said. A spokesman for the ICC said it could not comment on the claims.
The allegations follow a series of arrests in India where police are investigating allegations of widespread match-fixing. Three members of the Rajasthan Royals Indian Premier League team have been arrested along with the manager of the Chennai Super Kings, who is the son-in-law of N Srinivasan, the president of Indian cricket’s ruling body, the BCCI.
(This article was distributed through the NewsCred Smartwire. By Dean Nelson, David Bergman for The Daily Telegraph Original article © The Daily Telegraph 2013)