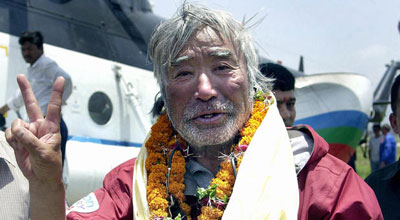 An 80-year old Japanese mountaineer has reached the summit of Mount Everest, making him the oldest man to scale the world`s highest peak.Yuichiro Miura, who climbed Everest when he was 70 and then again at 75, reached the peak early on Thursday morning, his support team said.
He replaces Nepal’s Min Bahadur Sherchan, who was 76 when he conquered Everest in 2008, as the record holder.
But Sherchan, now 81, is set to tackle the mountain again next week, reports the BBC.
Miura began his final charge for the 29,035-foot peak around 02:00 on Thursday, Japanese media reported, and arrived at the summit some seven hours later.
‘I made it!’ Miura said, speaking to his family and supporters via satellite phone from the summit.
‘I never imagined I could make it to the top of Mt Everest at age 80. This is the world’s best feeling, although I’m totally exhausted. Even at 80, I can still do quite well.’
A Nepalese mountaineering official also confirmed to media that Miura had made it to the summit.
(banglanews24.com)