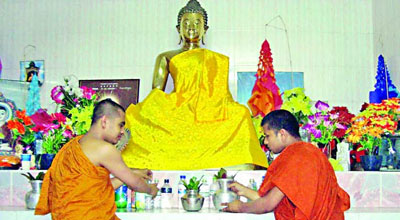 DHAKA: Buddha Purnima, the biggest religious festival of the Buddhist community, is being celebrated in the country Thursday with due tributes to Lord Buddha.The Buddhist organizations have chalked out various programmes to observe the day in a befitting manner.
The day is a public holiday.
Buddha Purnima marks three significant events that took place in the life of Lord Buddha–his birth, enlightenment and great passing away.
Lord Buddha was born in 563 BC, attained enlightenment and nirvana (passing away) on the same day.
President Abdul Hamid, Prime Minister Sheikh Hasina and opposition leader Khaleda Zia in separate messages, greeted the Buddhists as well as the countrymen on the eve of the day.
Bangladesh Buddha Kristi Prachar Sangha has chalked out a day-long programmes at Darmarajik Buddha Mohabiher in the city marking the day.
Amongst the programmes, the devotees will hoist of the national and religious flags atop all monasteries, chant of sacred verses from the Tripitaka, peace rally (Shovajatra), discussion and cultural function.
Bangladesh Buddhist Federation has taken elaborated programmes to observe the day in a befitting manner.
The programmes will be held Dhaka International Buddhist Bihar in city’s Merul Badda.
A discussion is set to be held at Dharmarajik Buddha Mohabihar with Bangladesh Buddha Kristi Prachar Sangha president Shuddahnandha Mohathero in the chair.
Social Welfare Ministry Enamul Haque Mostafa Shaheed is likely to attend the programme as chief guest.
In another discussion to be held in the morning, Industries Minister Dilip Barua is to attend as the chief guest.
(banglanews24.com)