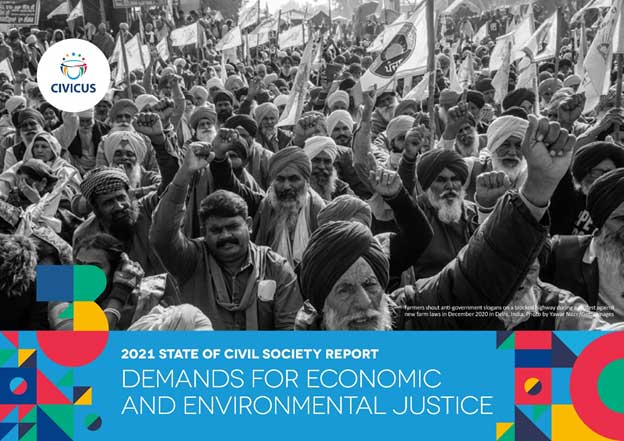 By Mandeep Tiwana
NEW YORK, May 26 2021 (IPS) – It has been one year since the police murder of George Floyd, an outrage that resonated around the world. The killing forced people to the streets, in the USA and on every inhabited continent, to demand respect for Black lives and Black rights, proving that protest was essential even during the pandemic. The Black Lives Matter (BLM) demonstrations are the latest in a great global wave of protests that started with the Arab Spring 10 years ago and continue today, seen in the brave civil disobedience people are mounting against Myanmar’s military coup and the protests against Israeli violence in Palestine, with people taking to the streets around the world to show solidarity and demand an end to the killing.
Millions of people are protesting because they can see that protests lead to change – the trial of the officer responsible for George Floyd’s killing was an incredibly rare event that would likely not have happened without protest pressure – and because mass mobilisations often offer the only means of resistance to repressive governments.
CIVICUS’s just-published 2021 State of Civil Society Report describes how decentralised movements for racial justice and gender equality are challenging exclusion and demanding a radical reckoning with systemic racism and patriarchy.
Threats posed by economic inequality and climate change are enabling people to connect across cultures, spurring mobilisations in many different countries. Today, not only in Myanmar and Palestine, but in Colombia, Lebanon and Thailand among many others, people are demanding economic opportunity, a real say in how they are governed, and an end to discrimination.
Much blood is being spilt in unwarranted violence against protesters by repressive security apparatuses acting on the behest of vested interests. Inarguably, the right to mobilise is being sharply contested because of its potential to redistribute power to the excluded.
Major political transformations in modern history have been catalysed through largely peaceful protests. Sustained mass mobilisations have resulted in significant rights victories including expansion of women’s right to vote, passing of essential civil rights laws, dismantling of military dictatorships, ending apartheid, and legalisation of same-sex marriage.
In the past year, despite the disruptions of COVID-19, populist demagogues have faced stiff resistance from people driven by a hunger for justice and democracy. In Brazil, thousands came out to the streets to protest against horrendous bungling by the Bolsonaro administration in its response to the COVID-19 pandemic which has resulted in a monumental loss of lives.
In India, thousands of farmers remain steadfastly defiant in camps outside Delhi to protest against hurriedly drawn-up laws designed to undermine their livelihoods and benefit big business supporters of Prime Minister Modi’s autocratic government.
In Russia, pro-democracy protests in several cities against the grand corruption of strongman President Putin have so alarmed him that he engineered the imprisonment of his most prominent political opponent. In Uganda, political opposition-led protests have inspired people from all walks of life to stand up against President Museveni who’s been in power for 35 years.
In Belarus, protests by ordinary people displaying extraordinary courage helped bring international attention to an election stolen by Alexander Lukashenko, the first and only president the country has known since the present constitution was established in 1994.
In the United States, the decentralised Black Lives Matter movement is spurring action on racial justice and the unprecedented prosecution of police officers engaged in racist acts of violence against Black people.
The movement not only helped dispatch a race-baiting disruptive president at the polls, it also had a deep impact beyond the United States by spotlighting racism in places as diverse as Colombia, the Netherlands, South Africa and the United Kingdom.
Notably, women-led movements are challenging gender stereotypes, exposing patterns of exclusion, and forging breakthroughs to lay the groundwork for fairer societies. Concerted street protests by women in Chile helped win a historic commitment to develop a new justice-oriented constitution by a gender-balanced constitutional assembly that will also include Indigenous people’s representation.
In Argentina, legislation to legalise abortion and protect women’s sexual and reproductive rights followed years of public mobilisations by the feminist movement.
Our research finds that, in country after country, young people are at the forefront of protest. Young people have taken ownership of climate change to make it a decisive issue of our time. The Fridays for Future movement which began with a picket in front of the Swedish parliament on school days now has supporters organising regular events to demand urgent political action on the climate crisis on all continents.
Present day movements are deriving strength by taking the shape of networks rather than pyramids, with multiple locally active leaders. Hong Kong’s ‘Water Revolution’ may have been repressed by China’s authoritarian might, but the metaphor of behaving like water – shapeless, mobile, adaptable – holds true for many contemporary movements.
Unsurprisingly, powerful people’s mobilisations are inviting sharp backlash. Protest leaders and organisers are often the first to be vilified through official propaganda and subjected to politically motivated prosecutions.
Many of the rights violations that CIVICUS has documented in recent years are in relation to suppression of protests. Persecution of dissenters, censorship and surveillance to stymie public mobilisations remains rife.
They are all part of a tussle between people joining together in numbers to demand transformative change, and forces determined to stop them. Yet, the principled courage of protesters who mobilise undeterred by repression continues to inspire.
Protests are about challenging and renegotiating power. To succeed they need solidarity and allies across the board. The responsibility to safeguard the right to peaceful assembly enshrined in the constitutions of most countries and in the international human rights framework rests with all of us. History shows us that when people come together as civil society great things are possible.
(Mandeep Tiwana is Chief Programmes Officer at global civil society alliance CIVICUS.
The State of Civil Society Report 2021 can be found online here.)