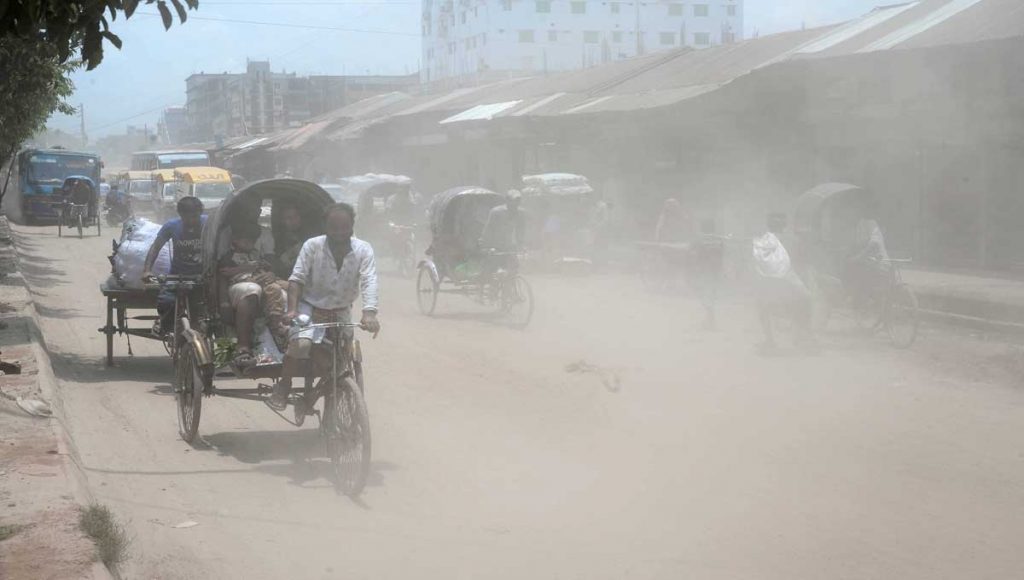 Dhaka, Feb 9 – Green activists on Saturday voiced deep concern that around 90 dwellers in Dhaka city are affected by serious dust pollution and urged the authorities concerned to take effective steps to check it.
Speaking at a human chain programme, they also said the intensity of dust pollution rises usually during winter due to road digging and delayed disposal of wastes, causing the spread of various respiratory, allergy and skin diseases.
Poribesh Bachao Andolan (Poba) and Nagorik Odhikar Sangrakkhan Forum along with some other organisations jointly organised the programme in front of the Department of Fine Arts of Dhaka University in the city’ Shahbagh area.
Poba Chairman Abu Naser Khan, general secretary Ferdous Ahmed Ujjal, Nagorik Odhikar Sangrakkhan Forum general secretary M Toyab Ali, Samajik Andolon Sangstha president Humayun Kabir Bhuiyan and Poribesh Andolon Mancha president Amir Hasan Masud, among others, addressed the programme, said a press release.
They said around 40 of patients in the child wards of different hospitals get admitted with respiratory diseases during winter due to serious dust pollution.
The environmentalists also said dust pollution is also hitting the economy hard seriously harming the environment apart from causing public sufferings and health hazards.
They demanded the government take quick steps to check dust pollution and action against those responsible for it.
The green activists also put forwarded a 12-point recommendation, including removing the construction materials and excavated soil from the roadside quickly after repair works of the roads, cleaning the roads and footpaths regularly, not keeping construction materials at open places or beside the roads, taking effective steps against air pollution by different factories and creating awareness among the city dwellers about the dust pollution and its adverse impacts. – UNB