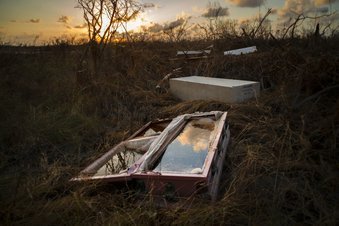 High Rock, Sep 13(AP/UNB) — Pastor Jeremiah Saunders stood in the golden afternoon sun and barely blinked as he debated what to pick out from the ruins of the church he built 22 years ago in the seaside village of High Rock on the eastern end of Grand Bahama island.

A black-and-blue necktie floated in a pool of water. Nearby, a ruptured set of drums lay toppled on its side. Bone-white sea shells were nestled in tufts of grass, flung there by the surging floodwaters that had carried Saunders for 200 yards until he managed to grab hold of a large pine tree branch, where he spent two days after Hurricane Dorian crashed ashore.

“I spoke to the water: ‘Peace, be still.’ It never listened,” he said with a wide smile. But then he grew serious as he focused on the daunting cleanup facing the tens of thousands who live on Grand Bahama and Abaco, the two northern islands that were devastated by the Category 5 storm.

It will be a slow process that some are tackling in very small steps. Saunders picked out two hammers, five screwdrivers and three treasured Bibles.

In contrast, 67-year-old Mary Glinton in the nearby fishing village of McLean’s Town wasted no time getting rid of all her ruined possessions. She created three piles of clothes stiffened by mud and set them on fire. A once-white lace curtain, a muddied pink wind-breaker and a pair of black pants all went into the flames. She most lamented that all her church clothes were ruined.

“I love blue, and most of my dresses are blue,” she said standing near the fire in green flip-flops, her legs caked with mud. She also mourned the loss of her 1-year-old pet hog, Princess.

A preliminary report estimates Dorian caused some $7 billion in damage, but the government has not yet offered any figures. Crews have started to remove some debris on the islands, but they are moving slowly to avoid accidentally disturbing any bodies lying in the rubble. The official death toll stands at 50, and Prime Minister Hubert Minnis said he expects the number to significantly increase.

Authorities said Thursday that the list of people missing in the hurricane’s aftermath had been reduced to about 1,300 names from an earlier 2,500. The government has said it is checking the original names against the rosters of people evacuated from the devastated islands or staying in shelters.

A cluster of heavy thunderstorms heading to the Bahamas threatened to further drench those trying to salvage belongings or living in tents in hard-hit communities. Late in the day, the U.S. National Hurricane Center said the system was expected to become a tropical storm within 36 hours and would hit parts of the northwestern Bahamas with tropical storm-force winds and heavy rains.

USAID officials, meanwhile, said they would distribute plastic sheeting ahead of the storm.As the cleanup continued, the first hints of normalcy could be seen in Freeport, a city on Grand Bahama that is operated by a private company, which provides utilities and charges residents without any government involvement.

Lights began to flicker on in some neighborhoods, and crews were seen repairing transformers in other areas.Among those celebrating the return of electricity was Clifton Williams, who was driving home from work on Wednesday when he saw an illuminated streetlight for the first time since the hurricane.

“I didn’t expect that so quickly,” he said. “First thing I do, I cut on the fan and cool off myself,” he added, saying he slept well for the first time in more than a week thanks to the fan.
But the small villages that dot the eastern coast of Grand Bahama have barely received any help. Some residents have been hitchhiking daily from Freeport to their destroyed homes to sort through their belongings and clean up.

Tereha Davis, a 45-year-old fisherwoman, said she was unable to find a ride one day and ended up walking eight miles under the blistering sun. She piled up the things she managed to salvage until she could find a ride back to Freeport with her few remaining possessions. On Wednesday, she walked through McLean’s Town wearing purple surgical gloves, taking a break from cleaning as she looked for something sweet to drink for a boost of energy. She found nothing.

She and others said they had not seen any government officials and have only received food and water from nonprofit groups.The prime minister acknowledged the difficult situation in a televised address late Wednesday.

“There have been problems in the coordination of this aid due to the magnitude of this devastation,” Minnis said, adding that he understands the deep frustration of those dealing with “bureaucratic roadblocks” and pledged to reduce the red tape and bring in more aid and extra personnel.

“There are no words sufficient to describe this tragedy,” Minnis said. “No Bahamian has ever seen anything like this in their lifetime.”
As they wait for more help, people across Grand Bahama waded into the cleanup, tossing out mattresses, tearing off roof shingles and clearing branches and power lines.

At his Beulah Land Ministries church, the 61-year-old Saunders had been preparing to open a small boarding lodge for visiting mission groups before Dorian hit. He stood surrounded by gleaming white toilets and sinks, piles of shiny brown tiles and soggy rolls of burgundy carpet.

“I am going to rebuild,” he said as he surveyed the ruins of his church. The only thing left unscathed was a wooden crucifix that he had nailed to a wall 22 years ago.